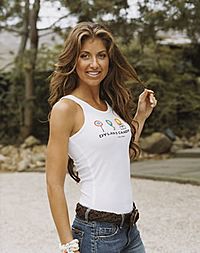 Dylan Lauren (born May 9, 1974) is an American businesswoman. She is the owner of New York City's Dylan's Candy Bar, which claims to be the largest candy store in the world. She founded the company in 2001. She is the daughter of fashion designer Ralph Lauren and socialite Ricky Lauren.

Lauren was born in New York City. She is Jewish. She married Paul Arrouet in 2011. The couple have two children.

All content from Kiddle encyclopedia articles (including the article images and facts) can be freely used under Attribution-ShareAlike license, unless stated otherwise. Cite this article:
Dylan Lauren Facts for Kids. Kiddle Encyclopedia.