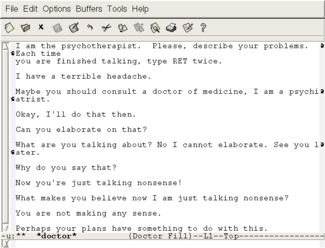 Example of ELIZA in Emacs.

ELIZA is an early program able to process natural language. ELIZA operated by processing users' responses to scripts. The most famous script was called DOCTOR. It was a simulation of a Rogerian psychotherapist. Eliza didn't know much about thought or emotion. However, DOCTOR sometimes provided conversation like a human. ELIZA was written at MIT by Joseph Weizenbaum between 1964 to 1966.

When the person used words that were not in the very small list, DOCTOR might say, for example, responding to "My head hurts", "Why do you say your head hurts?" The response to "My mother hates me" might be "Who else in your family hates you?" ELIZA was programmed using simple pattern matching techniques, but was taken seriously by several of its users, even after Weizenbaum explained to them how it worked. It was one of the first chatterbots in existence.

All content from Kiddle encyclopedia articles (including the article images and facts) can be freely used under Attribution-ShareAlike license, unless stated otherwise. Cite this article:
ELIZA Facts for Kids. Kiddle Encyclopedia.