Eagle Crest Resort is located in Ypsilanti, Michigan, located in the southeast part of the state. The resort consists of the Ann Arbor Marriott Ypsilanti at Eagle Crest, Eastern Michigan University's Eagle Crest Conference Center and Eagle Crest Golf Club. The facility was built in 1989. In 2006, Golf Digest gave the golf course a 4 out of 5 star rating. 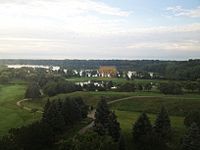 The resort is 137 acres located adjacent to Ford Lake. The resort is just off Interstate 94 in Ypsilanti. The facility was built in 1989 and is designed by Karl V. Litten. The facility is broken down into three parts hotel, conference center and a golf course. The facility also has a jogging trail and tennis courts. The tennis courts is used by Eastern Michigan Woman's Tennis. As well, the golf course is home to EMU Men's and Women's Golf. The conference center is owned by Eastern Michigan University has 27,000 square feet (2,500 m2) of meeting space. The resort is also part of the International Association of Conference Centers, IACC.

The hotel has 235 rooms. The hotel is not run by Eastern Michigan University but by Marriott International. The hotel's name is The Ann Arbor Marriott Ypsilanti at Eagle Crest. The hotel went through a multimillion-dollar renovation in 2008.

The 18-hole course is 6,750 yards total in length and is a par 72 course. The course has a parkland style and a bent fairway grass. The course is only open between March and November. In 2006, the course was given a 4 star rating out of 5 by Golf Digest.

All content from Kiddle encyclopedia articles (including the article images and facts) can be freely used under Attribution-ShareAlike license, unless stated otherwise. Cite this article:
Eagle Crest Resort (Ypsilanti, Michigan) Facts for Kids. Kiddle Encyclopedia.