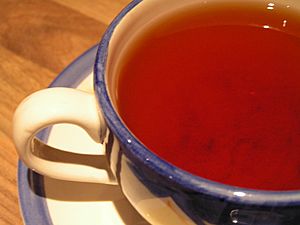 A cup of Earl Grey tea

Earl Grey tea is a kind of tea that has a flavour and smell that comes from bergamot orange, a citrus fruit. The tea was named after Charles Grey, 2nd Earl Grey, a British prime minister from the 1830s.

The name "Earl Grey" only used to be given to black tea, but now the name is used for other teas that have oil of bergamot, or a bergamot flavour. Twinings, a British tea company, uses a portrait of Charles Grey, 2nd Earl Grey on its Earl Grey package.

All content from Kiddle encyclopedia articles (including the article images and facts) can be freely used under Attribution-ShareAlike license, unless stated otherwise. Cite this article:
Earl Grey tea Facts for Kids. Kiddle Encyclopedia.