Acianthus apprimus, commonly known as early mosquito orchid, is a flowering plant in the orchid family Orchidaceae and is endemic to New South Wales in Australia. It is a terrestrial herb with a single, heart-shaped leaf and between two and nine translucent pinkish flowers with reddish markings and is found in disjunct populations around the state. 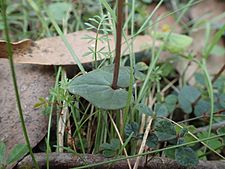 This species is distinguished from the similar Acianthus fornicatus by its folded labellum which leaves only the callus in view and by its very early flowering period - A. fornicatus flowers from May to August.

Acianthus apprimus was first formally described by David Jones in 1991 and the description was published in Australian Orchid Research from specimens he found near Mount Wilson the previous year. The specific epithet (apprimus) is a Latin word meaning "the very first" referring to the early flowering habit of this species. In a 1995 paper published in the journal Allertonia, Paul Kores claimed that A. apprimus and four other species are not distinct from A. fornicatus and should be regarded as a synonyms. That position has been adopted by the Royal Botanic Gardens, Kew.

This orchid grows among grass, shrubs and bracken in tall montane forest at altitudes between 600 and 900 m (2,000 and 3,000 ft). It is found in the Blue Mountains, New England National Park, near Walcha and on Mount Duval.

When first described, this species was rated 2R on the ROTAP list, but since a review in 2007 it has not been listed in terms of the EPBC Act.

All content from Kiddle encyclopedia articles (including the article images and facts) can be freely used under Attribution-ShareAlike license, unless stated otherwise. Cite this article:
Early mosquito orchid Facts for Kids. Kiddle Encyclopedia.