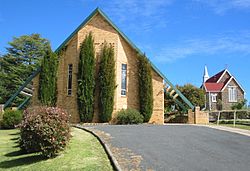 Walcha ( WOL-kə) is a town at the south-eastern edge of the Northern Tablelands, New South Wales, Australia.

The town serves as the seat of Walcha Shire. Walcha is located 425 kilometres by road from Sydney at the intersection of the Oxley Highway and Thunderbolts Way. The Apsley River passes through the town to tumble over the Apsley Falls before joining the Macleay River further on. Originally the river caused flooding in the town prior to a levee bank being constructed and saving the town from more floods. At the 2011 census, Walcha had a population of 1,482 people.

The Main North railway line is located some distance away, at a separate village called Walcha Road which serves as the railhead. This is served by the daily NSW TrainLink Xplorer service between Sydney and Armidale. The railway line was built at Walcha Road, because it was the closest point they could get to the town, due to the steep climb over the Great Dividing Range.

The area is thought to have been occupied by the Danggadi Indigenous Australians prior to European settlement. In 1818, John Oxley became the first white person to discover the area and the falls which were later to be named Apsley Falls.

Hamilton Collins Sempill was the first settler in the New England area when he took up the 'Wolka' run in 1832, establishing slab huts where 'Langford' now stands. Other early runs around the district were Bergen-op-Zoom (1834), Ohio (1836), Europambela (c.1836), Surveyor’s Creek (1836), Emu Creek (c.1837), Ingalba (1837), Orandumbie (1837), Tiara (1837) and Winterbourne (1837). A severe depression from 1841 to 1843, and low demand for wool created hardship for many of these early settlers. In 1848 Walcha run is recorded as being 64,000 acres (260 km2) and in the lease of David Lanarch. During 1854 Walcha was sold to Rundle and Dangar who held the mortgage for Jamison and Connal. Later John Fletcher acquired Walcha and moved from Branga Plains to Oorundumby. After being sold in 1905, Oorundumby was resumed for soldier settlement in 1947 and subdivided into 22 holdings.

A ‘wool’ road to Port Macquarie (the Oxley Highway) was under construction in 1842 for the transportation of wool from New England to the coast. Walcha Post Office opened on 1 July 1850. The mail arrived from Macdonald River (now Bendemeer). Walcha was gazetted as a village site in 1852, when town allotments were sold, with annual sales following. At that time there was a blacksmith's shop, a general store and a flour mill. A Roman Catholic chapel was erected in 1854, a police station and the first Presbyterian church was built in 1857 and the Walcha National School in 1859.

In 1861 the population was recorded at 355 and the Anglican church was built in 1862 of stone taken from the demolished homestead, 'Villa Walcha', erected on the Wolka run in the 1840s. The old church has fine stained-glass windows which bear tribute to some of the town's pioneers.

The population dropped in the 1860s but the town soon began to grow for two reasons: firstly, red cedar getters were active in the area's rainforests by about 1870. Gold was discovered near Walcha in the 1870s at Glen Morrison, Tia, The Cells River and Nowendoc. Antimony, copper, graphite, manganese, silver and high quality slate was also mined in the district.

On 5 April 1878 Walcha was proclaimed a town, when it was gazetted, the boundaries defined and a courthouse was built. A rail link to Sydney and Uralla opened at Walcha Road in 1882. The town became a municipality in 1889. On 19 March 1890 the Walcha Pastoral & Agricultural Association was formed. This annual show has excellent exhibits of livestock, produce, vegetables, flowers, wool and handicrafts. Walcha Cottage Hospital founded in 1890 and was situated on the southern hill in South Street. The Shire of Apsley was constituted by proclamation on 7 March 1906. It is in the counties of Vernon, Hawes, and Inglis and comprises about 60 parishes. The area is 1,605,590 acres (6,497.6 km2). The Shire of Walcha was constituted by the Union of the Municipality and the Shire of Apsley as from on 1 June 1955.

History was made at Walcha in 1950 when a Tiger Moth was the first aircraft used to spread superphosphate by air in Australia. The ‘super’ was dropped on Mirani and other landholders soon followed suit to greatly increase the livestock carrying capacity of the district.

In 1992 the Walcha Telecottage was established to become the first telecentre established in Australia. The Telecottage is a not for profit community with the latest information communication facilities, in order to activate interactions between the local communities and to create employment opportunities. This Telecottage carries out not only the fundamental types of work such as job training, remote education, secretarial service and data analysis, but also Internet access service for individuals and small companies. Walcha Telecottage produces a weekly community newsletter, the Apsley Advocate, which is free and delivered to over 1,600 commercial and private addresses.

During 2008 Walcha recorded one of the state's highest rises in property values at 20 per cent over the last 5 years, according to a report from Australian Property Monitors. 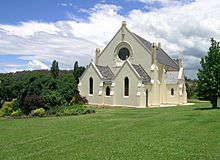 The local buildings and objects of natural, indigenous and historic significance listed on the Register of the National Estate includes the following:

Some of the rare or endangered plants that may be found growing in the district include: Chiloglottis anaticeps (bird orchid), Eucalyptus michaeliana, (Hillgrove spotted gum) and Philotheca myoporoides (Mountain Wax-flower), which are growing in the local national parks.

Grey kangaroos, wallabies, possums, echidnas (spiny ant eaters), black and brown snakes, Eastern Blue-tongued Lizards and Amphibolurus muricatus (Jacky dragons) may be seen in and around the town. Birds that may be found in the local area include: magpies, kookaburras, plovers, wood ducks, spoonbills, galahs, currawongs, crimson rosellas and cockatoos.

The population of Walcha is mainly Christian (80.4%) and Australian-born (90.6%). The median age of 42 years is slightly older than the Australian average of 37. Less than one third (31.9%) of Walcha residents are over the age of 55, compared to a national average of 24%.

Wool section, Walcha show. The creamy fleeces on the left are crossbred wool.

Natural attractions abound in the area and include the Apsley Falls located about 20 kilometres east of Walcha just off the Oxley Highway. The first drop of the Falls is about 85 metres in depth, and the second, about half a mile further on, drops around 65 metres to the bottom of the gorge. Walcha is the southern gateway to the Oxley Wild Rivers National Park and Werrikimbe National Park, which are registered with Central Eastern Rainforest Reserves (CERRA). Composing of mainly scenic gorge country, 900 km² of it, part of it is listed on the register of World Heritage sites in recognition of its importance to nature conservation. Other interesting nearby national parks include: Mummel Gulf National Park and Cottan-Bimbang National Park.

Walcha has an Open Air Gallery where local, national and international artists have combined to create a unique streetscape with about 41 sculptures and artworks, plus 30 sculptured verandah posts in front of local businesses. There is approximately one artwork per every 85 citizens in the "Open Air Gallery", along with a large collection of works in the local gallery, making Walcha a very cultural and artistic community for its size.

The Walcha Jockey Club, Walcha Bushmen's Campdraft and Rodeo Association, Walcha Show Society and the Campdraft Club hold large annual events that extend over several days each. The Walcha Bushmen's Campdraft and Rodeo Association makes large annual donations to various local organisations and other worthy causes. The New England Merino Field days which display local studs, wool and sheep are held every two years in even numbered years. A biennial Timber Expo was established to showcase the local timber industry. A biennial Garden Festival is held in the spring of even numbered years to display some of the beautiful local gardens. Proceeds from this event are donated to services such as Angel, Westpac Life Saver Rescue Helicopter Service or Riverview Hostel.

There are numerous other sporting and general interest clubs in the town.

All content from Kiddle encyclopedia articles (including the article images and facts) can be freely used under Attribution-ShareAlike license, unless stated otherwise. Cite this article:
Walcha, New South Wales Facts for Kids. Kiddle Encyclopedia.