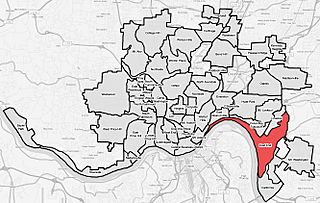 East End is a neighborhood of Cincinnati, Ohio.

East End is a neighborhood in Cincinnati, Ohio. It is the location of the Cincinnati Municipal Lunken Airport and Columbia Parkway. The population was 1,518 at the 2010 census.

The East End was home of the short-lived East End Park in the 1890s.

The neighborhood, a 7-mile (11 km) strip along the Ohio River, once held Cincinnati's manufacturing district.

The East End is served by St. Rose Church.

All content from Kiddle encyclopedia articles (including the article images and facts) can be freely used under Attribution-ShareAlike license, unless stated otherwise. Cite this article:
East End, Cincinnati Facts for Kids. Kiddle Encyclopedia.