East End Women’s Museum (EEWM) is a virtual, pop-up museum and the only dedicated women’s museum in England. A new building in Barking town centre is scheduled to open in 2021-2022.

The mission of the East End Women's Museum (EEWM) is to "Research, record, share and celebrate the stories of east London women past and present." 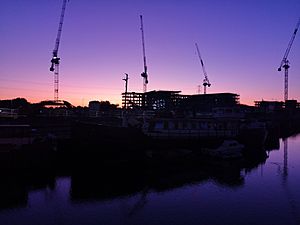 East End Women's Museum (EEWM) is a small museum dedicated to the powerful stories and diverse voices of women of east London. Its aim is "to give representation to all women, particularly those traditionally marginalised, including women of colour, women with disabilities, lesbian and bi women, trans women, working-class women, older women, women from migrant or itinerant communities, women who are refugees or asylum-seeking" Women are underrepresented within British historical record and female voices have often been overlooked; for example, only 14% of English Heritage's famous blue plaques honour women. In order to provide more opportunities for female voices, its goal is to challenge gender inequality and encourage women to express their thoughts and tell their own stories.

A permanent building will be set up at Barking in 2021-22 at the postcode approximately at IG11 7BB. It is planned that exhibits in the museum building will be delve into "local history from the perspective of women, challenge gender stereotypes and offer new role models for local girls."

East London, including but extending beyond the East End of London, has been a place full of intense political activism and women's equality movements. England's ‘first feminist’ , Mary Wollstonecraft, spent her early childhood at Barking. The matchgirls' strike of 1888 occurred at the Bryant & May match factory in Bow. The sewing machinists strike at Ford Dagenham in 1968 was a landmark labour-relations dispute which led to the passing of the Equal Pay Act 1970.

The suffragette movement was strong in the area. When Sylvia Pankhurst and her followers were expelled from the Women's Social and Political Union in 1912, they set up the East London Federation of Suffragettes. The last surviging suffragette, Annie Clara Huggett, lived locally and has a women's centre in Dagenham named after her.

Past Projects and Activities 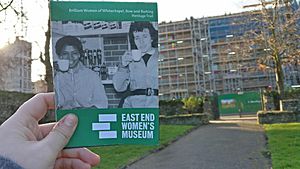 As a virtual, pop-up museum, the EEWM seeks to engage local communities through temporary exhibitions, workshops, talks and events, different research, online learning and touring around East London. Its pop-up exhibitions have been all over East London:

All content from Kiddle encyclopedia articles (including the article images and facts) can be freely used under Attribution-ShareAlike license, unless stated otherwise. Cite this article:
East End Women's Museum Facts for Kids. Kiddle Encyclopedia.