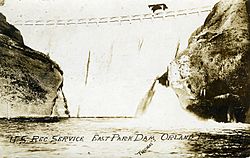 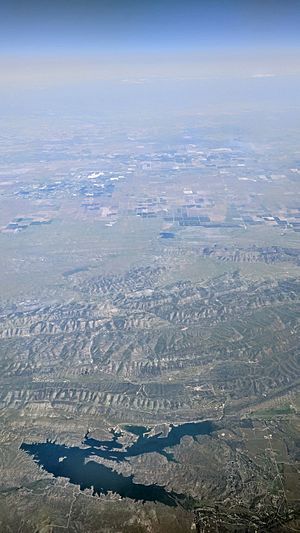 Aerial view of East Park Reservoir from the west

East Park Dam is an agricultural irrigation dam and reservoir built by the United States Bureau of Reclamation, on Little Stony Creek, about 30 miles (48 km) southwest of Orland, California on the northern end of the California Central Valley.

The dam was completed in 1910. Its main structure is a curved, thick-arch concrete gravity dam, 92 feet (28 m) high, with two sluice gates. The control house is in the shape of a pagoda, and the spillway, about 2,000 feet (610 m) south of the dam on the western side of the reservoir, features an eccentric set of curved labyrinth-spillway fins. The reservoir has a storage capacity of 51,000 acre feet (63,000,000 m3).

The California Office of Environmental Health Hazard Assessment (OEHHA) has developed an advisory for the East Park Reservoir based on mercury and PCBs found in fish caught from this water body. The advisory provides safe eating advice for species caught in the body of water.

The East Park dam and reservoir was one element of the Orland Project in the area, one of the earliest, and one of the smallest, ever undertaken by the Bureau. Other components of the project include:

Still functioning, the local Orland Unit Water Users' Association has operated the project since October 1, 1954. It was added to the National Register of Historic Places in the 1980s.

All content from Kiddle encyclopedia articles (including the article images and facts) can be freely used under Attribution-ShareAlike license, unless stated otherwise. Cite this article:
East Park Dam Facts for Kids. Kiddle Encyclopedia.