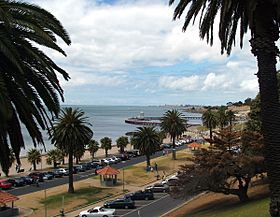 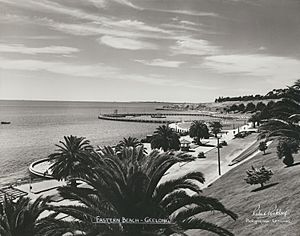 Eastern Beach is a specific beach in Geelong, not to be confused with Waterfront Geelong.

Eastern Beach is a popular swimming and recreation area in Geelong, Victoria on the shores of Corio Bay. Built during the 1930s in the Art Deco style, a shark proof sea bath is provided, as well as a children's swimming pool, kiosk, and dressing room pavilion. A number of Art Deco buildings in the area are listed on the Victorian Heritage Register.

It was not always the beach it is today. In the early years that area of Geelong was considered an eyesore, with steep cliffs running from the northern town boundary to the shores of Corio Bay.

Redevelopment plans were first proposed in 1914 by the City of Geelong. Work was to include a 1-mile (1.6 km) sea wall from Yarra Street to Limeburners Point, land reclamation, and the flattening of the cliffs along the beach. Further plans were drawn up for a chalet at the beach, which later appeared in the form of the kiosk building.

Work began in September 1927 when contracts were let for construction of the concrete stairway, terraces and dressing sheds. J.C. Taylor and Sons were the successful contractor. That stage of the works was opened on December 20, 1929 by the Mayor of Geelong Cr Sol Jacobs.

To cater to beach goers, a tramway extension along Corio Terrace (later Brougham Street) as far as Bellerine Street opened in October 1940. The line was closed in 1956 along with the rest of Geelong's tramways. 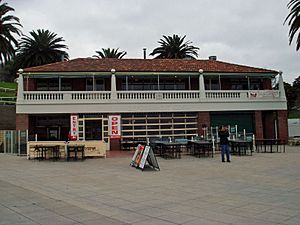 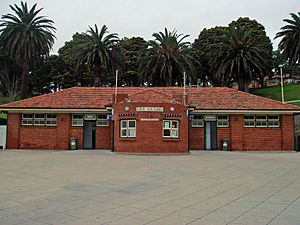 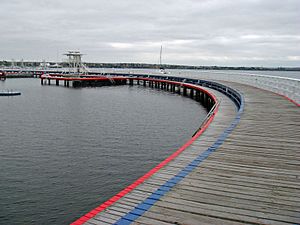 The area began a slow decline from the 1960s, with its popularity declining as a result of increased motor car ownership giving Geelong residents easier access to ocean beaches. Later decades of neglect saw the area fall into disrepair.

This decline was arrested in 1993, when the City of Greater Geelong announced plans for the restoration of the area. Partial funding of the works came from public 'purchasing' a plank in the swimming enclosure boardwalk. The enclosure was rebuilt, and the swimming pool, kiosk, and change rooms refurbished. The Beach House restaurant was also opened on the upper level of the kiosk building.

The late 1990s saw the original diving tower reinstated at the ocean end of the swimming enclosure after an absence of many years. However, the rebuilt structure was altered from the original design, omitting access to the topmost level due to injury concerns.

The redevelopment was the first stage of the Waterfront Geelong developments that have continued along the shore of Corio Bay.

The beach hosts many festivals and concerts year round and also hosts the annual Geelong Carols by the Bay concert hosted by Denis Walter.

All content from Kiddle encyclopedia articles (including the article images and facts) can be freely used under Attribution-ShareAlike license, unless stated otherwise. Cite this article:
Eastern Beach (Victoria) Facts for Kids. Kiddle Encyclopedia.