Echizen Ono Castle is a Japanese castle that is in Ono City, Fukui Prefecture. Until the Meiji period, the administrative headquarters of the Ono Domain region was established. The castle tower was built in the Shōwa period. In 2017, it was included in "Second series Top 100 Japanese Castle".

In 1575, Nagachika Kanamori began to build a castle on Kameyama mountain, a small mountain in Ono County. It took several years to build the castle. After the Kazunori Aoki’s era, the Echizen Matsudaira family became a shogunal property, and the castle owner changed many times until the Doi family got it. The castle burned down in 1775 and was rebuilt in 1795 with the exception of the castle tower, but it was destroyed again after the Meiji Restoration.

Echizen Ono Castle had a large watchtower on the second and third floors with an observation tower in the main area and another smaller watchtower on the second floor. It also had multiple Kuruwa--districts limited by water, fence, or anything else. These districts were the secondary area of a castle (二ノ丸, Ninomaru) and the furthest outer area (三ノ丸, Sannomaru) at the beginning of the Kameyama mountain, connecting a canal and a river to protect the castle. It also had a stone wall (石垣, ishigaki) which is a wall or fence made by assembling stones, with a construction method called Nozora-zumi (野面積み), which is an old style stone wall piled up without processing natural stone. This is nowadays a valuable historic site. However, the castle tower itself has not been rebuilt after it was burnt down in 1795. 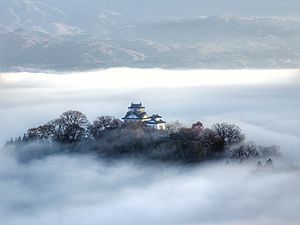 Castle in the clouds in the morning

In the history of Echizen Ono Castle, 19 different feudal lords have changed (大名, daimyo), until the time in which the castle was sold in 1872. In addition to Nagachika Kanamori, the castle owners of the Azuchi-Momoyama period included Kazunori Aoki, who is said to be related to Hideyoshi Toyotomi, and Hideo Oda, the grandson of Nobunaga Oda.

In 1575, Nagachika Kanamori built the castle (citadel, Ninomaru, Sannomaru) at the top of Kameyama mountain. It was built as a defense facility. A castle town, which was one of the forms of the city in Japan, was established around the lord's residence. The castle tower built by Nagachika Kanamori is a Hirayama-jiro, which is a castle built on a hill in the plains.

Nagachika Kanamori, who built the castle town, was one of the early guards for Nobunaga Oda. The reason why the land of Ono was given to Nagachika Kanamori is that at that time, Nobunaga was struggling with fighting lords nationwide and was not able to control the region.

Ono's morning market, which has 400 years of history and tradition, is held every morning on Shichiken street, a part of what was the original castle town (except in winter). At this market, there are different shops selling special products from Echizen Ono, most of which are agricultural products and goods from other parts of Japan or the world.

All content from Kiddle encyclopedia articles (including the article images and facts) can be freely used under Attribution-ShareAlike license, unless stated otherwise. Cite this article:
Echizen Ono Castle Facts for Kids. Kiddle Encyclopedia.