Edgar Valter was born on 21 September 1929, in Tallinn, the fourth child of a family of eight kids. He completed middle-school in 1945, but didn't graduate from Secondary School.

He began working as a freelance artist in 1950, eventually illustrating some of the most famous Estonian children literature characters, including the Krõll, the Naksitrallid, the Sipsik, and the Kunksmoor. Edgar Valter illustrated over 250 books, most of them being books for children. His caricatures were published by many journals and newspapers. Edgar Valter worked for the magazines Hea Laps (a good kid), Täheke (a star), Pioneer, and Pikker (a humor and satire magazine published during soviet times).

Edgar Valter lived his last 15 years in the Pöörismäe farm, located at the Urvaste rural municipality of the Võrumaa County. He died on 4 March 2006. His remains were cremated and buried on 17 May 2006 at Metsakalmistu in Tallinn.

The Poku Book and Pokus

First published in 1994, Pokuraamat (The Poku Book) tells the tale of Pokus. A poku is a grass mound that grows in south-eastern Estonian bogs. In the book, Valter interprets pokus as animated childlike creatures, the grass actually being their golden head hair, which grows down to their feet. Its central theme is emphasizing the need to respect and to live in harmony with nature.

Pokuraamat was the first book that was both written and illustrated by Edgar Valter. In 1996, the book won the prestigious Nukits Competition award for best children book of the year. Edgar Valter wrote two subsequent Poku-related books after that: Pokuaabits (The Poku ABC) (2002) and Pokulood (Poku Stories) (2004). 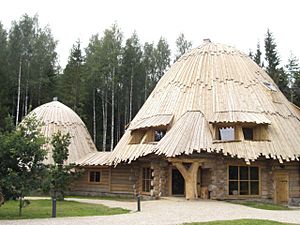 In Rebaste village (Kanepi Parish), the Pokuland (Estonian: Pokumaa) is opened. Pokuland is a thematic park where almost everything is related to Pokus.

All content from Kiddle encyclopedia articles (including the article images and facts) can be freely used under Attribution-ShareAlike license, unless stated otherwise. Cite this article:
Edgar Valter Facts for Kids. Kiddle Encyclopedia.