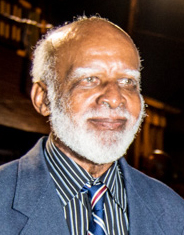 Sir Edmund Wickham Lawrence GCMG OBE CSM JP (born 14 February 1932) is an economist, businessman and politician. He was the Governor-General of St. Kitts and Nevis from 2013 to 2015. In the 1999 New Year Honours, Lawrence was honored as an Officer of the Most Excellent Order of the British Empire (OBE).

All content from Kiddle encyclopedia articles (including the article images and facts) can be freely used under Attribution-ShareAlike license, unless stated otherwise. Cite this article:
Edmund Wickham Lawrence Facts for Kids. Kiddle Encyclopedia.