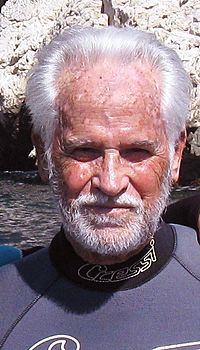 Eduard Admetlla i Lázaro (10 January 1924 – 8 October 2019) was a Spanish scuba diver, underwater cameraman and photographer. He was the designer of a self-contained underwater breathing apparatus (scuba) and also was the tester of scuba diving gear for the Nemrod trade mark. He was born in Barcelona.

All content from Kiddle encyclopedia articles (including the article images and facts) can be freely used under Attribution-ShareAlike license, unless stated otherwise. Cite this article:
Eduard Admetlla i Lázaro Facts for Kids. Kiddle Encyclopedia.