Education in Wales facts for kids

Education in Wales differs in certain respects from education elsewhere in the United Kingdom. For example, a significant minority of students all over Wales are educated either wholly or largely through the medium of Welsh: in 2014/15, 15.7% of children and young people received Welsh-medium education – a drop from the 15.9% in 2010/11. An additional 10% attend schools in which significant portion of the curriculum is bilingual. The study of the Welsh language is available to all age groups through nurseries, schools, colleges and universities and in adult education. The study of the language is compulsory for all pupils in State Schools until the age of 16.

Since devolution, education policy in the four constituent countries of the UK has diverged: for example, England has pursued reforms based on diversity of school types and parental choice; Wales (and Scotland) remain more committed to the concept of the community-based comprehensive school. Systems of governance and regulation – the arrangements for planning, funding, quality-assuring and regulating learning, and for its local administration – are becoming increasingly differentiated across the four home countries. Education researcher David Reynolds claimed in 2008 that policy in Wales was driven by a "producerist" paradigm emphasising collaboration between educational partners. He also alludes to lower funding in Welsh schools compared to England, echoing similar concerns at university level. He concludes that performance data did not suggest that Wales had improved more rapidly than England, although there were considerable difficulties in making these kinds of assessments.

The structure of the Welsh educational system 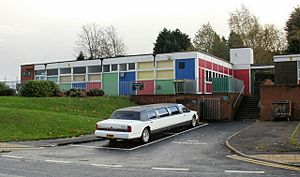 From the start of the January, April or September (whichever comes soonest) following a child's third birthday they become eligible for a minimum of ten hours a week in publicly-funded nursery education, though these hours can also be provided through a playgroup or childminder. Nursery lessons are focused on developing children's abilities in a variety of areas such as creativity, communication and general knowledge however, at this age, learning to read and write is not yet considered a priority. Depending on their parents economic and employment status children in this age-range may be eligible for up to twenty additional hours of state-subsidised childcare each week.

The Welsh government is planning to introduce universal state funded childcare for two-year-old children by the mid 2020s. Currently, only the most disadvantaged toddlers in this age group and those in some more deprived areas are entitled to 12.5 hours of care provided by the state.

A child's age on 1 September determines the point of entry into the relevant stage of education. Education is compulsory beginning with the term following the child's fifth birthday, but may take place at either home or school. Most parents choosing to educate through school-based provision, however, enrol their children in the reception year in September of that school year, with most children thus beginning school at age four or four and a half. This age was traditionally much earlier than in most other Western nations, but in recent years many European countries have lowered their age of compulsory education, usually by making one or more years of kindergarten compulsory. 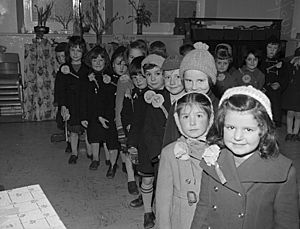 In 2008 a unique new curriculum – the Foundation phase – was rolled out to all schools in Wales. It began for 3- to 4-year-olds and by 2011 was in place for 3- to 7-year-olds. It is based on experiential learning, in small groups, with a teacher ratio of 1:8 for the youngest ages.

Pupils in secondary school take part in the compulsory GCSE and the non-compulsory A-level or BTEC qualifications at ages 15/16 and 17/18 respectively. Since 2007 the Welsh Baccalaureate Qualification has also been available as an option although it was ungraded until 2014.

There are four formal education consortia in Wales covering:

Each of the consortia are responsible for school improvement services throughout their respective local authorities and schools. Whilst all aspects of school improvement are considered consortia roles, they are specifically targeted with addressing the three Ministerial priorities of; improving levels of literacy, numeracy and reducing the impact of poverty on education attainment.

Further education (FE) includes full- and part-time learning for people over compulsory school age, excluding higher education. Young people often enrol in FE as an alternative to staying at school after the age of 16. FE and publicly funded training in Wales is provided by 15 FE institutions in 2014/15 and a range of public, private and voluntary sector training providers, such as the Workers' Educational Association. Colleges vary in size and mission, and include general FE, tertiary and specialist institutions, including one Roman Catholic Sixth Form College and a residential adult education college. Many colleges offer leisure learning and training programmes designed to meet the needs of business. In 2014/15 there were 263,315 FE students in Wales spanning the entire availability of FE at multiple placements, including FE, HE (higher education), LA (local authority) Community, and work-based learning.

Adult Community learning is a form of adult education or lifelong learning delivered and supported by local authorities in Wales. Programmes can be formal or informal, non-accredited or accredited, and vocational, academic or leisure orientated. In 2018–2019, there were 23,970 learners in Local Authority Community Learning.

See also: List of universities in Wales and Tuition fees in the United Kingdom 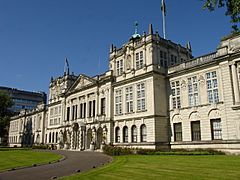 Students normally enter higher education (HE) from 18 onwards. Undergraduate students contribute £9,000 a year in fees, and are generally entitled to student loans and grants depending on their family's economic situation for maintenance. The state does not control syllabi, but it does influence admission procedures and monitors standards through the Higher Education Funding Council for Wales.

In 2012, the minister with responsibility for education within Wales, Leighton Andrews, made a significant statement in relation to the merger of Cardiff Metropolitan University (CMU, formerly UWIC), the University of Glamorgan and University of Wales, Newport (UWN), in which he proposed the dissolution of CMU and UN as part of the process towards merger. However significant such changes may seem, it is arguable that the effective imposition of an average undergraduate fee of £7.5 K pa for the three institutions (and others, but not to Cardiff, Swansea, Bangor and Aberystwyth all of whom will charge £9 K pa) will cause much more substantial long term damage to these universities and reinvent the 'binary divide' between universities and the former polytechnics and HE institutes.

All content from Kiddle encyclopedia articles (including the article images and facts) can be freely used under Attribution-ShareAlike license, unless stated otherwise. Cite this article:
Education in Wales Facts for Kids. Kiddle Encyclopedia.