Kids Encyclopedia Facts
Not to be confused with Edward Angel.

Edward Hartley Angle (June 1, 1855 – August 11, 1930) was an American dentist, widely regarded as "the father of American orthodontics". He was trained as a dentist, but made orthodontics his speciality and dedicated his life to standardizing the teaching and practice of orthodontics. He founded the Angle School of Orthodontia in St. Louis and schools in other regions of the United States.

He was born to Philip Casebeer Angle and Isabel Erskine Angle in Herricks, New York. He was fifth of the seven children. During his childhood years he demonstrated early talent of working with tools and machinery including hay rake. He attended high school in Canton, Pennsylvania. Before joining dental school, he worked for a local dentist from 1874 to 1876. He studied at the Pennsylvania College of Dental Surgery and became a dentist in 1878. He then started working in town of Towanda, Pennsylvania soon after his graduation. In 1881, he developed chronic respiratory problem which forced him to move to Minnesota for few months. As soon as his health improved, he came back to Pennsylvania to eventually move to Montana to open a sheep-ranching business with his older brother Mahlon. In 1882, he moved to Minneapolis after the Winter of 1882 killed the sheep at his ranch. He married Florence A Canning in March 1887 and had a daughter named Florence Elizabeth Angle. In 1904 Angle served as the Chairman of the Orthodontics section at the fourth International Dental Congress in St. Louis.

He married Anna Hopkins in St. Louis in 1908 after getting divorced from his earlier wife. Before marrying Dr. Angle, Anna had earned her DDS degree from University of Iowa College of Dentistry in 1902. He moved to Larchmont, New York, with Anna in 1908, where he taught a 6-week course through his school. He eventually moved to New London, Connecticut, in 1911, in a Tudor Revival custom design house located at 58 Bellevue Place, sold to him by a New London great architect, Dudley St. Clair Donnelly, where he continued teaching, but due to health reasons he was forced to leave to Pasadena, California. He eventually opened his school in his new Tudor revival home, designed by the same architect of 58 Bellevue Place, in Pasadena in 1917.

In 1886, he took a position as a faculty to teach comparative anatomy and orthodontia at the University of Minnesota. He at the same time maintained his private practice of dentistry in Minneapolis. Angle's original interest was in prosthodontics, and he taught in that department in the dental schools at Pennsylvania and Minnesota in the 1880s. In 1887, he published a 14-page paper in a textbook by Loomis Haskell, which eventually became to known as his "first" edition of the seven editions he published of his famous book. He was then elected as the President of the Minneapolis City Dental Society in 1888 after which he published his second edition of the textbook in 1890. He resigned his position as a faculty at the University of Minnesota and officially limited his practice towards Orthodontics. In 1892, he published his third edition of the textbook called "The angle system of regulation and retention of teeth. The fourth edition, The angle system of regulation and retention of teeth and treatment of fractures of maxillae, was published in 1895. He then relocated to St. Louis, Missouri with his family and his assistant, Anna Hopkins whom he hired her in 1892. He earned his Medical degree from Marion Sims College in 1897.

In November 1899, he taught a Postgraduate course on orthodontia in his office in St. Louis where his students urged him to create a school for teaching Orthodontics. He founded the Angle School of Orthodontia in St. Louis, Missouri 1900, where he formally established orthodontics as a specialty. With Angle the specialty of orthodontics received a new impetus. He coined the term malocclusion to refer to anomalies of tooth position and classified various abnormalities of the teeth and jaws, invented appliances for their treatment and devised several surgical techniques as well. Angle standardized appliances in a series of books and pamphlets, including a text that he authored, Treatment of Malocclusion of the Teeth and Fractures of the Maxillae: Angle's System.

Edward Angle has 46 patents to his name. 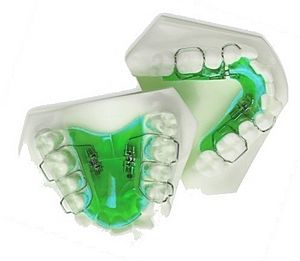 He died in 1930 in Santa Monica at the age of 75 from heart failure. He was buried in Mountain View Cemetery in Altadena, California.

All content from Kiddle encyclopedia articles (including the article images and facts) can be freely used under Attribution-ShareAlike license, unless stated otherwise. Cite this article:
Edward Angle Facts for Kids. Kiddle Encyclopedia.