Herricks is a hamlet and census-designated place (CDP) in Nassau County, on Long Island, in New York, United States. The population was 4,295 at the 2010 census.

It is an unincorporated area, and is located in the southern part of Town of North Hempstead.

According to the United States Census Bureau, the CDP has a total area of 0.6 square miles (1.6 km2), all land. It is an unincorporated entity, governed under the jurisdiction of the Town of North Hempstead. It is estimated to be bordered by Searingtown Road/Shelter Rock Road to the north, Hillside Avenue to the south (vis-a-vis with Garden City Park), Herricks Road to the east and Marcus Avenue to the west. Mail delivery is provided by the New Hyde Park Post Office utilizing the 11040 Zip Code.

The school in Herricks was established in 1813, making it one of the oldest in Nassau County. It was named for Herricks Path, a path that existed as early as 1659. By 1898, the Herricks School was one of Nassau County's last single-room schools. 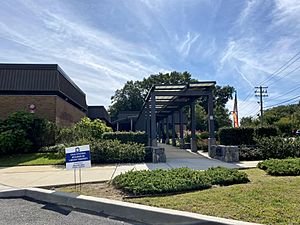 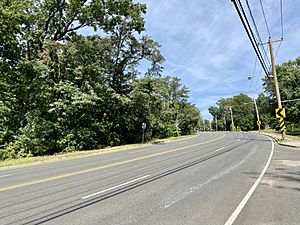 Searingtown Road within Herricks in October 2021.

No rail lines pass through Herricks. The nearest Long Island Rail Road stations to the hamlet are New Hyde Park on the Main Line and East Williston on the Oyster Bay Branch.

The n22 runs along Hillside Avenue at the hamlet's southern border. This bus line is operated by Nassau Inter-County Express (NICE).

National Grid USA provides natural gas to homes and businesses that are hooked up to natural gas lines in Herricks.

PSEG Long Island provides power to all homes and businesses within Herricks.

All of Herricks is connected to sanitary sewers, which are part of the Nassau County Sewage District, which handles and treats the hamlet's sanitary waste.

Herricks is located within the boundaries of the Garden City Park Water District, which provides the entire hamlet with water.

All content from Kiddle encyclopedia articles (including the article images and facts) can be freely used under Attribution-ShareAlike license, unless stated otherwise. Cite this article:
Herricks, New York Facts for Kids. Kiddle Encyclopedia.