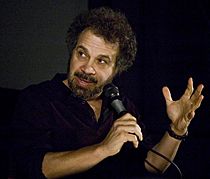 Edward M. Zwick (born October 8, 1952) is an Emmy Award-winning American movie and television director, writer and producer. He was born in Chicago. His best known movies are About Last Night, Glory, Legends of the Fall, and The Last Samurai. He is also the co-creator of the television series thirtysomething and Once and Again.

All content from Kiddle encyclopedia articles (including the article images and facts) can be freely used under Attribution-ShareAlike license, unless stated otherwise. Cite this article:
Edward Zwick Facts for Kids. Kiddle Encyclopedia.