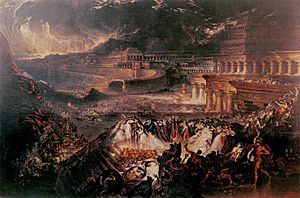 The Fall of Nineveh, painting by John Martin (1829), inspired by Edwin Atherstone's poem

Edwin Atherstone was born in Nottingham on 17 April 1788. He was one of fifteenth children of Hugh Atherstone and Ann Green. He learned in Yorkshire at Fulneck Moravian School. He lived with Mary Wainwright Pearson. They were never married, but had four children, three daughters and a son. Atherstone taught music at school in Taunton. He also collected paintings. The poet died in Bath on 29 January.

Edwin Atherstone wrote a lot. He published his first poem, named Last Days of Herculaneum in 1821. His best known work is the poem The Fall of Nineveh. The poem was written for many years. First edition was published in 1828, and the last one in 1868. It is written in blank verse. It is over twenty thousand lines long. It consists of a prelude and thirty books. It tells about a war between Medes and Assyrians. The war took place some centuries before Christ. Main heroes are Arbaces, prince of Medes, Belesis, a priest and friend of Arbaces and Sardanapalus, a cruel king of Assyria. After many battles Medes got Nineveh, which was the capital city of Assyria. Sardanapalus put fire to his own palace and died inside. Sardanapalus is really a criminal. The other poems by Atherstone are Israel in Egypt, about Moses and freeing Jews form slavery in Egypt, Abradates and Panthea and A Midsummer Day's Dream. He also wrote two novels: The Sea-Kings in England (1830) and The Handwriting on the Wall (1858).

He was a close friend and associate of the painter John Martin, whose well-known painting "The Fall of Nineveh" was produced in conjunction with Atherstone's poem.

All content from Kiddle encyclopedia articles (including the article images and facts) can be freely used under Attribution-ShareAlike license, unless stated otherwise. Cite this article:
Edwin Atherstone Facts for Kids. Kiddle Encyclopedia.