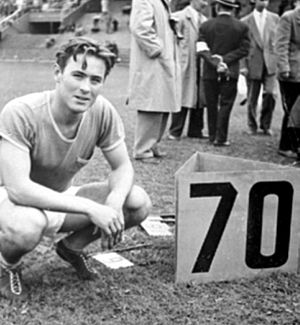 He retired after the 1960 Olympics and focused on his family and work at the Hamar Fire Brigade. In the 2000s he was a minor political candidate for the Norwegian Pensioner Party.

All content from Kiddle encyclopedia articles (including the article images and facts) can be freely used under Attribution-ShareAlike license, unless stated otherwise. Cite this article:
Egil Danielsen Facts for Kids. Kiddle Encyclopedia.