El Pueblo Ribera Court is a complex of twelve duplexes at 230–248 Gravilla Street and 230–309 Playa del Sur in La Jolla, San Diego, California. It was designed in 1923 by the Austrian-American Rudolf Schindler. Schindler's most famous works are in and around Los Angeles; El Pueblo Ribera is his only work in San Diego. 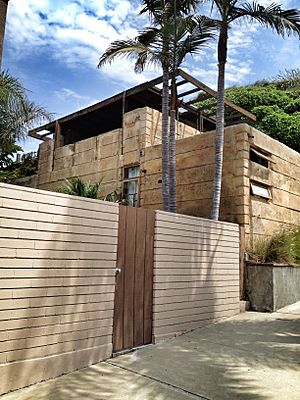 El Pueblo Ribera, side view of the complex from the west 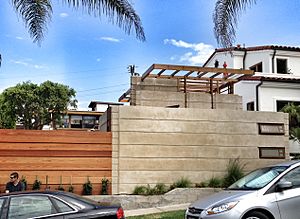 The complex was built in Modern architectural style. Each unit originally consisted of a bedroom on the ground level, and a sleeping porch on the upper level. Each unit enjoys a view of La Jolla's Windansea Beach.

All content from Kiddle encyclopedia articles (including the article images and facts) can be freely used under Attribution-ShareAlike license, unless stated otherwise. Cite this article:
El Pueblo Ribera Facts for Kids. Kiddle Encyclopedia.