The El Reno Heritage Express is a heritage streetcar line in El Reno, Oklahoma. It opened in 2001 as the only operating streetcar in the state (since joined by the Oklahoma City Streetcar). A single J.G. Brill Strafford Car runs a 1.5-mile (2.4 km) excursion service from the Canadian County Historical Museum in the former El Reno Chicago, Rock Island and Pacific Railroad Depot to a balloon loop downtown via a single-track line embedded in the road surface of Watts Street and Bickford Avenue. 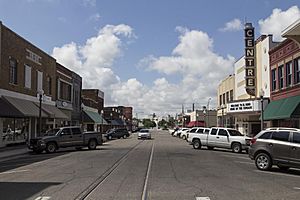 El Reno previously saw trolley service as a terminal of the El Reno Interurban Railway (later the Oklahoma Railway Company) running to Oklahoma City in 1911; that service ceased around 1947. The modern trolley line was built as part of a scheme to rehabilitate the downtown's drainage system, which had a history of failing and causing flooding issues for nearby business. Unable to fund the whole project on its own, the town partnered with the state to secure an Intermodal Surface Transportation Efficiency Act grant to rebuild downtown streets and sewers under the condition that a rail-based transit system be simultaneously installed and maintained by the city. El Reno was required to pay 20% of the $1.7 million project cost ($2.05 million adjusted for inflation). A disused 1924 J.G. Brill Strafford Car from Philadelphia, Pennsylvania, was acquired for $215,000 ($266020 adjusted for inflation) to be restored and converted to propane power in Iowa. To operate the service, the city approached the Canadian County Historical Society, who quickly accepted the offer. Service began on August 25, 2001, after a dedication ceremony the previous day. 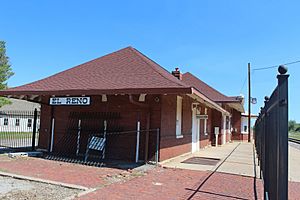 As of 2019[update], the line was operating Wednesday through Sunday, making several runs from 10 a.m. to 5 p.m. with a later start on Sunday.

All content from Kiddle encyclopedia articles (including the article images and facts) can be freely used under Attribution-ShareAlike license, unless stated otherwise. Cite this article:
El Reno Heritage Express Facts for Kids. Kiddle Encyclopedia.