El Toro (Spanish for The Bull) is a wooden roller coaster located at Six Flags Great Adventure in Jackson Township, New Jersey. Designed by Intamin of Switzerland, the wooden coaster opened to the public on June 11, 2006. Intamin contracted Rocky Mountain Construction (RMC) to build the ride, and the coaster's track was prefabricated, allowing for quicker installation and lower construction costs. When it opened, it had the steepest drop of any wooden roller coaster in the world at 76 degrees, until the record was broken by T Express in 2008 by one degree. Overall, its structure height of 181 feet (55 m) is ranked fourth, its drop height of 176 feet (54 m) is ranked second, and its top speed of 70 miles per hour (110 km/h) is ranked fourth among all wooden roller coasters in the world. It was also the first wooden roller coaster to use a cable lift as opposed to the traditional chain lift.

El Toro is the main attraction of the Mexican-themed section, Plaza Del Carnaval. It replaced Viper, a roller coaster that permanently closed following the 2004 season.

El Toro sits on the former site of Viper, which closed in 2004. Everything was removed in early 2005 except for the station. El Toro was announced on September 28, 2005 along with Bugs Bunny National Park, a new themed area for children. It was also announced El Toro would be part of a new themed area known as Plaza del Carnaval. The lift hill was topped off on December 20, 2005. The ride started testing on Memorial Day weekend in 2006. The ride had a surprise opening on June 11 then held its grand opening on June 12.

El Toro has several similarities to Viper, the coaster that it replaced. The most obvious similarity is that El Toro uses Viper's station, the only part of Viper that was not torn down. The station previously held two Viper trains at once, with a loading platform in the front and an unloading platform in the rear. The ramp that was previously Viper's main exit is now used only for wheelchair access, as El Toro has a new exit on the other side of the station. During El Toro's construction, the station was gutted and an entirely new platform built. Like El Toro, Viper turned left out of the station before the lift hill and turned left at the top of the lift before the first drop.

El Toro suffered a malfunction with the lift motor in early August 2013. The motor was sent to Maryland to be fixed. El Toro reopened several weeks later on August 30.

El Toro means "The bull" in Spanish, which is the theme of the ride. The trains are themed as "bulls" with bull heads on the front. The ride's queue is surrounded by the Southwestern-style buildings of Plaza del Carnaval, and also has abandoned "wagon wheels" and Spanish posters along a wall separating the queue from the ride. 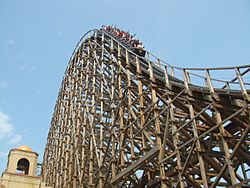 A train on the second hill

After departing from the station, the train makes a turn to the left, passing through the ride's structure. It then begins to climb the 181-foot (55 m) tall cable lift hill. Once the entire train is on the lift the cable increases its speed to around 13 mph. Once at the top of the lift the speed of the cable gently slows down, but it is barely noticeable on the ride. After cresting the top of the lift, the train briefly travels forward and makes a 180 degree turn to the left. It then drops 176 feet (54 m) at a 76 degree angle, reaching a top speed of 70 miles per hour (110 km/h). As the train reaches the bottom of the drop, it comes close to the track above, creating a headchopper-effect. It then travels up a 112-foot (34 m) camelback hill followed by a second camelback hill at 100 feet (30 m). It then rises and then travels through a 180 degree downward-banked turn to the right, and up another banked turn to the left. The train goes through a small second hill that speeds past the station and the lakeside. The train then makes another turn and up a smaller hill where riders experience -2 g forces on an ejector airtime hill. After coming down the drop, the train snakes through twists and turns. After coming out of the twister section, the train slows down as it moves through small "S" curve camelback hills and into the brake run.

El Toro operates with two trains with six cars per train. Riders are arranged two across in three rows for a total of 36 riders per train. It has a theoretical capacity of 1,200 guests per hour. One train has Kia Soul advertising wrapped onto the train itself. The other train has the classic train design, featuring the bull horns on the front of the train. The trains have padded "wings" at shoulder level to prevent riders from being thrown too far to the side in the final twister section. El Toro's lapbars are U-shaped - (Commonly known as "U-Bars".)

In 2010, one of the trains was re-themed to endorse Stride Gum. The train was wrapped in Stride Gum advertisements, showing a different flavor of Stride gum on each car. The advertisements remained on the train for the entire 2011 season, but were removed before the start of the 2012 season and replaced with Kia Soul advertising. 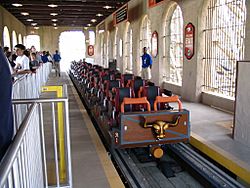 Train A in the station

The wooden track is approximately 4,400 feet (1,300 m) in length and the height of the lift is approximately 181 feet (55 m). El Toro is very different from a traditional wooden roller coaster because it uses prefabricated wooden track. It was built and designed by Intamin, who also worked with employees of Rocky Mountain Construction to build the ride. Instead of carpenters cutting, shaping, and laying down the track on site by hand, the track is laser cut in a factory. This means that the track is manufactured to a higher degree of precision than could be achieved by hand. The "Plug and Play" aspect of the coaster speeds construction of the coaster since track does not have to be completely manufactured on site. In addition, because of the speed of construction, the costs of building the coaster are lowered due to fewer man-hours spent on the construction. The riders are subject to a coaster whose track is as smooth as steel. El Toro is the first Intamin "Plug and Play" (Pre-Fab) wooden roller coaster in the United States and one of four in the world. The other three are Colossos at Heide Park in Germany, Balder at Liseberg in Sweden, and T Express at Everland in South Korea.

When El Toro debuted, it broke records as the second-tallest and fastest with the second-longest drop of a wooden roller coaster in the United States. As of 2016[update], El Toro has the fourth fastest speed, the fourth-tallest lift, and the second longest drop.

When the ride debuted, it ranked 3rd for "Best New Ride of 2006" in the Golden Ticket Awards.

All content from Kiddle encyclopedia articles (including the article images and facts) can be freely used under Attribution-ShareAlike license, unless stated otherwise. Cite this article:
El Toro (Six Flags Great Adventure) Facts for Kids. Kiddle Encyclopedia.