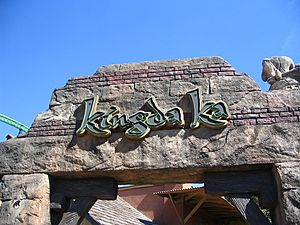 Plans to build Kingda Ka were announced on September 10, 2003, at an event held for roller coaster enthusiasts and the media. The event revealed the park's goal to build "the tallest and fastest roller coaster on earth", reaching 456 feet (139 m) and accelerating up to 128 miles per hour (206 km/h) in 3.5 seconds. On January 13, 2005, Kingda Ka's tower construction was completed, and on May 21, 2005, the ride opened to the public.

Kingda Ka became the "tallest" and "fastest" roller coaster in the world, taking both world records from Top Thrill Dragster at Cedar Point. It lost the title of world's fastest when Formula Rossa at Ferrari World opened in November 2010.

Kingda Ka is located in the jungle-themed area of the park known as The Golden Kingdom. The ride portrays a mythical bengal tiger named after one that was housed in the nearby Temple of the Tiger attraction, an interactive exhibit that was closed in 2010. The ride's queue line is surrounded by bamboo, which adds to the jungle-themed music that plays in the background. 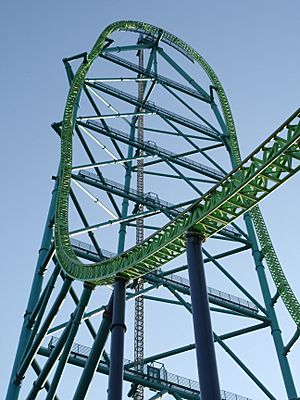 After the train has been locked and checked, it moves slowly out of the station to the launch area, then passes through a switch track which allows four trains on two tracks to load simultaneously. A recording announces: "Arms down, head back, hold on!" The train is launched approximately five seconds later.

When the train is in position, the hydraulic launch mechanism accelerates it from 0 to 128 miles per hour (0 to 206 km/h) in 3.5 seconds. At the end of the launch track, the train climbs the main tower (top hat) and rolls 90 degrees to the right before reaching a height of 456 feet (139 m).

It then descends 418 feet (127 m) straight down through a 270-degree, clockwise spiral. It climbs the second hill of 129 feet (39 m), producing a moment of weightlessness before being smoothly brought to a stop by the magnetic brakes; it then makes a left-hand U-turn and enters the station. The ride lasts 28 seconds from the start of the launch. 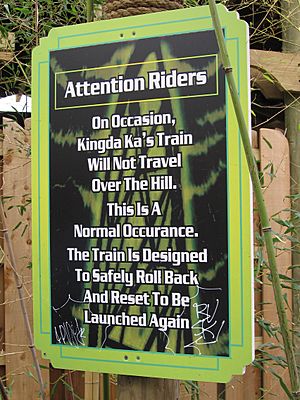 Kingda Ka's four trains are color-coded for easy identification (green, dark blue, teal, and orange) and are numbered; the four colors are also used for the seats and restraints. Each train seats 18 people (two per row). The rear car has one row, while the rest have two. The rear row of each car is positioned higher than its front row for better visibility.

A train may occasionally experience a rollback following a launch. A rollback occurs when the train fails to make it over the top of the tower and descends back down the side it was launched. Kingda Ka includes retractable magnetic brakes on its launch track to prevent a train from rolling back into the loading station.

All content from Kiddle encyclopedia articles (including the article images and facts) can be freely used under Attribution-ShareAlike license, unless stated otherwise. Cite this article:
Kingda Ka Facts for Kids. Kiddle Encyclopedia.