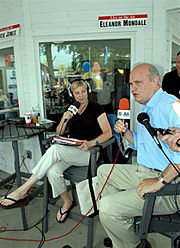 Mondale with Fred Thompson in September 2007

Mondale was born on January 19, 1960 in Minneapolis, Minnesota to Walter Mondale and to Joan Mondale. She studied at St. Lawrence University.

All content from Kiddle encyclopedia articles (including the article images and facts) can be freely used under Attribution-ShareAlike license, unless stated otherwise. Cite this article:
Eleanor Mondale Facts for Kids. Kiddle Encyclopedia.