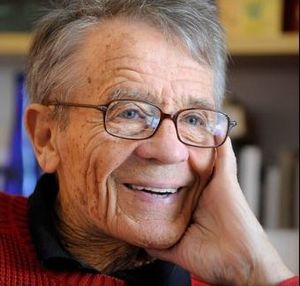 Elemér Hankiss (4 May 1928 – 10 January 2015) was a Hungarian sociologist. He taught at universities such as Stanford University and Central European University. He also wrote over ten books. From 1990 until 1993, he was the President of Hungarian Television.

Hankiss was born in Debrecen. His father was literature professor. He studied the English and French languages at Eötvös Loránd University. His first wife was politician Ágnes Hankiss. He had two children.

All content from Kiddle encyclopedia articles (including the article images and facts) can be freely used under Attribution-ShareAlike license, unless stated otherwise. Cite this article:
Elemér Hankiss Facts for Kids. Kiddle Encyclopedia.