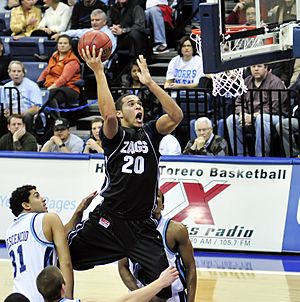 Harris committed to NCAA Division I squad Gonzaga University prior to the 2009–10 season. He immediately saw action with the Bulldogs despite being a freshman; in his second game of the season, against powerhouse #2-ranked Michigan State University, he scored a team-high 17 points and grabbed a team-high 9 rebounds in a narrow 75–71 loss.

After going undrafted in the 2013 NBA draft, Harris joined the Los Angeles Lakers for the 2013 NBA Summer League. He finished the summer league with averages of 10.2 points and 5.6 rebounds. On 14 August 2013, he signed a multi-year deal with the Lakers. During his rookie season, he had multiple assignments with the Los Angeles D-Fenders. On 29 November 2013, he was waived by the Lakers.

In July 2014, Harris joined the Phoenix Suns for the 2014 NBA Summer League. In 2020, he did not have his contract renewed by the Bamberg team. During his seven years with the team, Harris won three German championships and two German Cup titles. He served as team captain.

On 23 September 2020, Harris signed with Riesen Ludwigsburg of the Basketball Bundesliga.

On 3 January 2021, he signed with Basket Zaragoza of the Liga ACB.

Harris made his debut with the senior German national basketball team at the EuroBasket 2009. Although he was the second-youngest player on the team, he averaged 12 minutes per game while seeing action in all six games for the German squad.

All content from Kiddle encyclopedia articles (including the article images and facts) can be freely used under Attribution-ShareAlike license, unless stated otherwise. Cite this article:
Elias Harris Facts for Kids. Kiddle Encyclopedia.