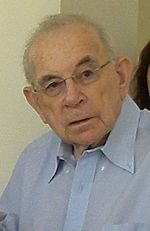 Eliyahu Winograd (Hebrew: אליהו וינוגרד) (December 1926 – 13 January 2018) was an Israeli judge. He was born in Tel Aviv. Winograd served as an acting Supreme Court judge in 1996 and was the former president of the Tel Aviv District Court.

Between September 11, 2006 and April 30, 2007, he chaired the Winograd Commission to investigate the failures experienced by Israel during the 2006 Israel-Lebanon conflict.

Winograd died of respiratory failure on 13 January 2018 in Tel Aviv at the age of 91.

All content from Kiddle encyclopedia articles (including the article images and facts) can be freely used under Attribution-ShareAlike license, unless stated otherwise. Cite this article:
Eliyahu Winograd Facts for Kids. Kiddle Encyclopedia.