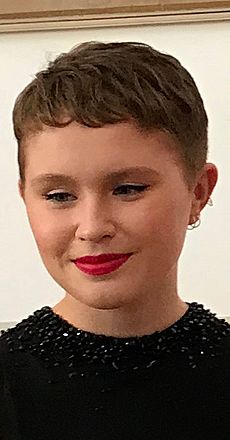 Eliza Jane Scanlen (born 6 January 1999) is an Australian actress. She first became known for her role as Tabitha Ford in the Seven Network soap opera Home and Away (2016). She then notably played Amma Crellin in the HBO miniseries Sharp Objects (2018). Her movie credits include Babyteeth (2019), Little Women (2019) and The Devil All the Time (2020).

Scanlen was born in Sydney, New South Wales. She has a fraternal twin sister named Annabel.

All content from Kiddle encyclopedia articles (including the article images and facts) can be freely used under Attribution-ShareAlike license, unless stated otherwise. Cite this article:
Eliza Scanlen Facts for Kids. Kiddle Encyclopedia.