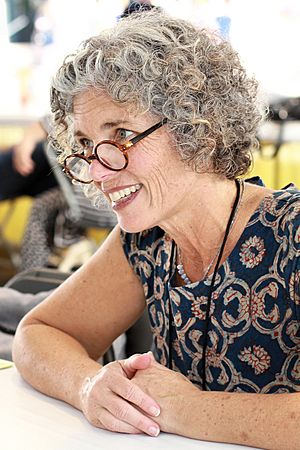 Scanlon at the 2018 Texas Book Festival

Elizabeth "Liz" Garton Scanlon is an American writer of children's books, primarily picture books in collaboration with other illustrators.

Elizabeth Garton grew up Vail, Colorado and later moved to Wisconsin. Her undergraduate degree was in English and her graduate was in Creative Writing. After helping her daughter put on socks she got the idea for her first book, A Sock Is A Pocket for Your Toes (2004). Five years later in September 2009, her second book All The World was published. It was illustrated by Marla Frazee, and won the Caldecott Award in 2010. In March 2011, Scanlon's third book, illustrated by Arthur Howard, Noodle and Lou, a story following a pair of unlikely friends, a bird and a worm, was released. Following Noodle and Lou came another children's book, Think Big, which is a "lyrical celebration of imagination and creativity in many child-friendly forms – painting, writing, acting, cooking, dancing and more, was illustrated by Vanessa Newton and published by Bloomsbury in Summer 2012." Happy Birthday Bunny was released in January 2013 and was illustrated by Stephanie Graegin. Scanlon is also reported to publish another children's book titled The Good- Pie Party, which is set to be illustrated by Kady MacDonald Denton and released in 2014.

All content from Kiddle encyclopedia articles (including the article images and facts) can be freely used under Attribution-ShareAlike license, unless stated otherwise. Cite this article:
Elizabeth Garton Scanlon Facts for Kids. Kiddle Encyclopedia.