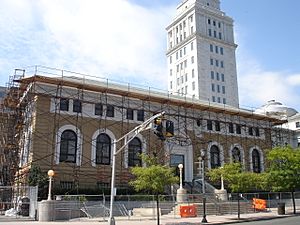 The Elizabeth Public Library is the free public library of Elizabeth, New Jersey. Serving a population of approximately 127,558, its collection contains 342,305 volumes, circulating 190,581 items annually from its four locations.

Elizabeth's Main Library was built during the "free library movement" at the turn of the 20th century in part with the impetus of Charles N. Fowler, US Congressman from Union County. It is one of New Jersey's original thirty-six Carnegie libraries, which by the 1940s had become one of the busiest libraries of its size in the USA. Records show that millionaire Andrew Carnegie granted $130,810 made February 3, 1910, for the main and no longer existing Liberty Plaza branch libraries. Opened in 1912, the building, reminiscent of an Italian palazzo and the Boston Public Library was designed by Edward Lippincott Tilton, who had designed many other Carnegie libraries as well as the immigration station at Ellis Island. It is a contributing property to the Midtown Historic District, a state and federal historic district established in 1994-1995. The Main Library is the Federal Depository Library for Union County.

All content from Kiddle encyclopedia articles (including the article images and facts) can be freely used under Attribution-ShareAlike license, unless stated otherwise. Cite this article:
Elizabeth Public Library Facts for Kids. Kiddle Encyclopedia.