An Elizabethan collar, also called a, e-collar, lampshade or cone of shame is a piece of equipment used in veterinary medicine. They stop the animal from licking or biting its body and from scratching or touching its head with its feet. 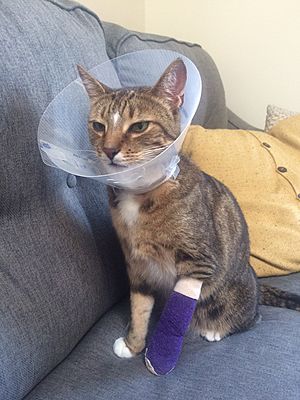 A cat with an injured leg and an Elizabethan collar.

The veterinarian places the collar around the neck of an injured animal so that it cannot bite or lick the injured part of its body. For example, a dog with a cut on its skin might need medicine placed directly on the cut. The dog might try to lick the medicine and poison itself. An animal that has had surgery might try to pull out its stitches. An animal with a broken leg might bite into its cast and try to pull it off. If it is wearing an Elizabethan collar, it cannot do this.

Some pet owners say their pets find it difficult to eat, drink and play while wearing an Elizabethan collar. Veterinarians sometimes try other collars, like those made out of cloth, collars that look like inner-tube-shaped cushions, and collars that act more like a neck brace, stopping the animal from moving its head.

Today, most Elizabethan collars are made out of plastic. In the 1800s, they could be made out of wood or leather.

All content from Kiddle encyclopedia articles (including the article images and facts) can be freely used under Attribution-ShareAlike license, unless stated otherwise. Cite this article:
Elizabethan collar Facts for Kids. Kiddle Encyclopedia.