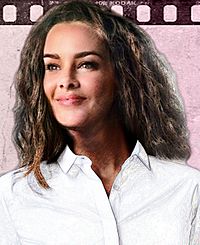 Elize Cawood (28 June 1952 – 18 July 2020) was a South African actress. On television, she was known for her role as Pop in Verspeelde lente (1984). Her best known movies were Dis ek, Anna and Red Dust. She was born in Bloemfontein, then Union of South Africa.

All content from Kiddle encyclopedia articles (including the article images and facts) can be freely used under Attribution-ShareAlike license, unless stated otherwise. Cite this article:
Elize Cawood Facts for Kids. Kiddle Encyclopedia.