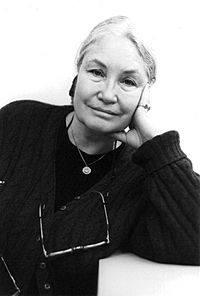 Ellen Schwiers (11 June 1930 – 26 April 2019) was a German actress. Her acting career lasted from 1949 to 2015. She acted in plays by Friedrich Dürrenmatt and Max Frisch at the Schauspielhaus Zürich. She appeared as the Buhlschaft in Jedermann at the Salzburg Festival. She also acted in over 200 movies and television series. Some of her screen roles include When the Bells Sound Clearly, The Inheritance of Bjorndal, God's Thunder and Tatort. In 1989, she was awarded an Officer's Cross of the Order of Merit of the Federal Republic of Germany.

Schwiers was born in Stettin, Pomerania, which is now the Polish city of Szczecin. She was married to Peter Jacob from 1956 until his death in 1992. The couple had two children.

All content from Kiddle encyclopedia articles (including the article images and facts) can be freely used under Attribution-ShareAlike license, unless stated otherwise. Cite this article:
Ellen Schwiers Facts for Kids. Kiddle Encyclopedia.