Elman Rustamov (Azerbaijani: Elman Rüstəmov) is an Azerbaijani politician. He has been the governor of Azerbaijan Central Bank since January 1995. 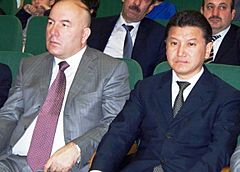 Rustamov was born 29 June 1952 in Jabrail district of Azerbaijan.

In 1973–1978, he had completed his PhD at the Azerbaijan National Economy Institute named after D. Bunyadzade. In 1986, he successfully defended the scientific thesis at Scientific Research Institute of Economy in Moscow and obtained a diploma.

During 1990-1992 he continued scientific activity towards a Doctorate degree at the Economy Institute under the USSR State Planning Committee. In 1993, he received a degree in Doctor economic science.

In 1991–1992, he continued his professional activity at the Presidential Administration of Azerbaijan as a chief adviser.

Rustamov joined the Central Bank of Azerbaijan in December 1992. In 1993–1994, he worked at the Agrarian – Industrial Union Joint Stock Bank as Deputy Chairman of the Management Board. In 1994, he was appointed to the First Deputy Chairman of the Management Board of Azerbaijan Central Bank. In 1995, he was nominated to the governorship by the Order of the Azerbaijan President - Heydar Aliyev. In 2000, 2005 and 2010, he was reappointed the second, third and fourth time.

Since 1995 he has simultaneously been Administrator for Azerbaijan at World Bank Group, MIGA and European Bank for Reconstruction and Development.

During the world economic crises in 2008-2009 monetary policy orientation of Central Bank of Azerbaijan has strictly expanded: refinancing rate was cut down from 15% up to 2%, reserve requirement ratio from 12% up to 0.5%. In exchange rate policy Rustamov voted for financial stability holding a pegged regime against the US dollar.

All content from Kiddle encyclopedia articles (including the article images and facts) can be freely used under Attribution-ShareAlike license, unless stated otherwise. Cite this article:
Elman Rustamov Facts for Kids. Kiddle Encyclopedia.