Economy of Azerbaijan facts for kids 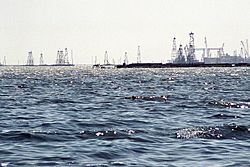 Oil platforms on the Caspian Sea in Azerbaijan.

The Economy of Azerbaijan is based on industry, agriculture, and on services including tourism. The energy sector based on the large reserves of crude oil and natural gas, is the main source of economic growth in Azerbaijan today, though half of the Azerbaijani people earn their income directly or indirectly through services and a third earn their income through agriculture. The energy boom has led to massive foreign direct investment and the growth rate of the Azerbaijani economy is one of the world's highest. 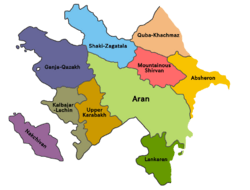 Azerbaijan is divided into 10 economic regions.

After gaining independence in 1991 with the end of the Soviet Union, Azerbaijan made the long and difficult change from a command economy to a market economy. The government has largely completed privatization of agricultural lands and small, medium and large stateowned companies. Azerbaijan is continuing making economic reforms, and old economic ties and structures have been slowly replaced. With independence, Azerbaijan became a member of the International Monetary Fund, the World Bank, the European Bank for Reconstruction and Development, the Islamic Development Bank and the Asian Development Bank. Azerbaijan's currency is the Azerbaijani manat (AZN) which is divided into 100 qəpik. It became the national currency in 1992 and replaced the old Soviet ruble. The Central Bank of Azerbaijan was created in 1992. The Central Bank serves as Azerbaijan's central bank, and is responsible for printing and distributing the national currency, the Azerbaijani manat, and to control all commercial banks.

Azerbaijan is rich in natural resources which provide energy, especially in crude oil and natural gas, and hydroelectricity and wind power. Other natural resources include minerals such as gold, silver, iron, copper, titanium, chromium, manganese, cobalt, molybdenum, complex ore and antimony which are mined. Crude oil and natural gas, are the most important products of Azerbaijan's economy and the main sources of export contributing to its economic growth. They are also the basis for an widespread system of refineries, which produce gasoline, herbicides, fertilizers, kerosene, synthetic rubber, and plastics. The oil and natural gas are carried through pipelines from the Caspian Sea to the Black Sea ports of Novorossiysk in Russia and Suspa in Georgia and to the Mediterranean Sea port Ceyhan in Turkey. Hydroelectric power plants supply 20% of the country's electric capacity and wind power production is slowly increasing. Other major industries include cement, fertiliser, steel, chemicals, automobiles, and machinery.

Agriculture is a small part of the economy which contributes only 6% of the GDP of Azerbaijan but employs 38.3% of the workforce. 21.78% of the total land area is arable land (land where crops can be cultivated (grown)) and 2.1% are used for permanent crops (crops which last for many seasons, rather than being replanted after each harvest). 16.45% of the total land area, which makes up the majority of Azerbaijan's cultivated lands, is irrigated. The major crops for are agricultural cash crops, grapes,cotton, tobacco, citrus fruits, rice, tea and vegetables. Livestock, dairy products, and wine and spirits are also important farm products. Farms in Azerbaijan are organized as state and cooperative farms which employ many farmers, and small private farms which are owned and run by one farmer and his/her family. A leading caviar producer and exporter in the past, Azerbaijan's fishing industry today is concentrated on the dwindling supply of sturgeon and beluga in the Caspian Sea.

Tourism is an important part of the economy of Azerbaijan. The country was a well-known tourist spot in the 1980s, yet, after the fall of the Soviet Union and the Nagorno-Karabakh War during the 1990s, damaged the tourist industry and the image of Azerbaijan as a tourist destination. It was not until the 2000s that the tourism industry began to recover, and the country has since experienced a high rate of growth in the number of tourist visits and overnight stays. In the recent years, Azerbaijan has also becoming a popular destination for religious, spa, and health care tourism. During winter, the ski resorts such as Shahdag Winter Complex are popular with foreign visitors.

All content from Kiddle encyclopedia articles (including the article images and facts) can be freely used under Attribution-ShareAlike license, unless stated otherwise. Cite this article:
Economy of Azerbaijan Facts for Kids. Kiddle Encyclopedia.