Elections in Azerbaijan facts for kids

Elections are held in Azerbaijan to elect the head of state (the president) and a legislature (the parliament).

The President of Azerbaijan is elected for a five-year term by the people; before a referendum by the people changed this in 2009, the position was limited to two terms.

Azerbaijan is a one party dominant state. Opposition political parties beside the New Azerbaijan Party are allowed but are widely considered to have no real chance of gaining power. 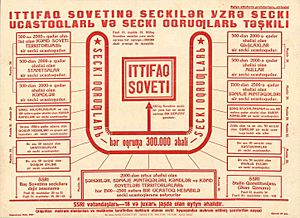 All content from Kiddle encyclopedia articles (including the article images and facts) can be freely used under Attribution-ShareAlike license, unless stated otherwise. Cite this article:
Elections in Azerbaijan Facts for Kids. Kiddle Encyclopedia.