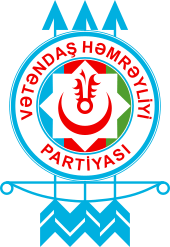 The.Civic Solidarity Party (Azerbaijani: Vətəndaş Həmrəyliyi Partiyası) is a nationalist and conservative political party in Azerbaijan. It was founded in 1992. The party's leader is Sabir Rustamkhanli, who is actually a poet. The party's ideology is based on the universal political values of freedom, equality and solidarity.

All content from Kiddle encyclopedia articles (including the article images and facts) can be freely used under Attribution-ShareAlike license, unless stated otherwise. Cite this article:
Civic Solidarity Party Facts for Kids. Kiddle Encyclopedia.