The beluga also known as the beluga sturgeon or great sturgeon (Huso huso) is a species of anadromous fish in the sturgeon family (Acipenseridae) of order Acipenseriformes. It is found primarily in the Caspian and Black Sea basins, and formerly in the Adriatic Sea. Going on maximum size, it is the third most massive living species of bony fish. Heavily fished for the female's valuable roe, known as beluga caviar, wild populations have been greatly reduced by overfishing and poaching.

The common name for the sturgeon, as for the unrelated beluga whale, is derived from the Russian word белый (belyj), meaning "white", probably referring to the extensive pale colour on the flanks and belly in beluga compared to other sturgeons. 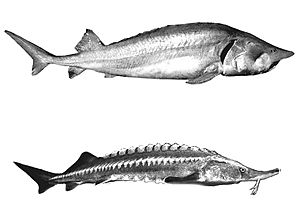 Huso huso, comparison between an adult (above) and a juvenile (below)

Huso huso shows typical characteristics of sturgeons, i.e., elongated body, heterocercal tail, partially cartilaginous skeleton, naked skin, longitudinal series of scutes.
The dorsal fin has 48 to 81 soft rays, the anal fin, much shorter, has 22 to 41 soft rays. The series of longitudinal scutes are five: dorsal (1 series, 9-17 scutes), lateral (2 series, one per side, 28-60 scutes each) and ventral series (2 series, one per side, 7-14 scutes each). The surface of the skin is covered by fine denticles. The rostrum is conical and contains numerous sensory pits on both ventral and dorsal surfaces. Large, crescent shaped mouth, protractile, with the upper lip continuous while lower lip is interrupted by a large gap. The barbels are laterally compressed with foliate appendages, arranged in two pairs, originating midway or closer to the mouth than the tip of the snout.

However, during the growth Beluga sturgeon shows evident morphologic changes: 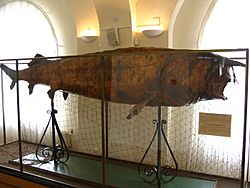 Among all extant bony fishes, Beluga sturgeon may be considered a rival to the ocean sunfish (Mola sp.) as the most massive fish, the second longest fish after the giant oarfish (Regalecus glesne), as well as the largest freshwater fish in the world. The beluga also rivals the great white shark (Carcharodon carcharias) and the greenland shark (Somniosus microcephalus) for the title of largest actively predatory fish.

Beluga of such great sizes are very old (continuing to grow throughout life) and have become increasingly rare in recent decades due to the heavy fishing of this species. Today, mature belugas that are caught are generally 142–328 cm (4 ft 8 in–10 ft 9 in) long and weigh 19–264 kg (42–582 lb). The female beluga is typically 20% larger than the male. An exceptionally big beluga caught recently reportedly weighed 960 kg (2,120 lb) and measured 3.4 m (11 ft 2 in).

Like most sturgeons, the beluga is anadromous, migrating upstream in rivers to spawn on clean, hard substrate, which offers both support and cover to their sticky/adhesive eggs. Spawning biology and development of larval stages of sturgeons - the most ancient fish of the Danube - co-evolved with the formation of the Danube valley, resulting in very different survival strategies of their early life stages. This is in brief the accepted explanation of the fact that different individuals of the same long-migratory species spawned as far upstream as Danube river km 1700, while others spawned at river km 100. To make the long journey to very distant spawning grounds, sturgeons adopted to a two-stage migration strategy entering the river in fall and staying over winter in reaches of the river offering adequate substrate and water flow resting conditions. Very few locations of existing wintering and spawning grounds for sturgeons are presently known in the Lower Danube River, none in the Middle Danube River and Upper Danube River. The same situation concerns nursery sites the young sturgeons depend on during their journey to the Black Sea 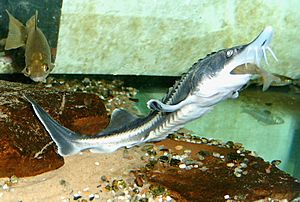 Fingerling of Huso huso eating a small fish in aquarium

Huso huso is a pelagic predator which local distribution is not influenced by the nature of the substrates, unlike most of the sturgeons which show demersal attitude. The prey is sucked into the mouth opening extremely quickly[1].
Juveniles feed on benthic invertebrates in rivers and shallow coastal waters, where they grow quickly. At the length of 8–10 cm, they become largely piscivorous. Different diets have been observed throughout the distribution range of Beluga sturgeon, as well as according to spawners' migration stage. Adults mainly eat a great diversity of large fish (73% of the diet). Additional food items may include molluscs and crustaceans, aquatic birds and young seals (Caspian seals, Pusa caspica).
The piscivorous diet of Beluga sturgeon tendentially changes with age: in the Caspian Sea, it mainly consists in Clupeonella sp. for juveniles smaller than 40 cm, different species of Gobiidae for fish ranging between 40 and 280 cm, then mullets, Alosa sp. and other sturgeons for the biggest. 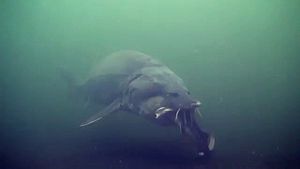 In brackish environments of the Ponto-Caspian basin, the genera Alosa, Aspius and Engraulis are the preferred prey. In estuaries and rivers of the same area, migrating spawners eat various cyprinids, mainly Cyprinus carpio and Rutilus rutilus, Sander lucioperca and, among sturgeons, Acipenser ruthenus is the main prey.
It is little known about the diet of the Adriatic population, it has been reported that in marine and brackish environments adult H. huso foraged primarily on molluscs (Cephalopoda, of which common cuttlefish, Sepia officinalis, and European squid, Loligo vulgaris, are particularly common in the Adriatic sea) and fish belonging to the families Gadidae, Pleuronectidae, Gobiidae, Clupeidae, Scombridae and Mugilidae, but also on big crustaceans; in the rivers, they fed mainly on local Cyprinidae. 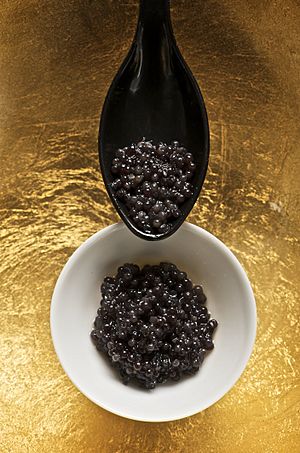 The caviar of a beluga sturgeon, the main reason for the massive overharvesting of this species.

Beluga caviar is considered a delicacy worldwide. The flesh of the beluga, though, is not particularly renowned but is a hearty white meat similar to that of swordfish. Beluga caviar has long been scarce and expensive and its endangered status has made its caviar even more expensive throughout the world.

Its air bladder is said to make the best isinglass.

The United States Fish and Wildlife Service has banned imports of beluga caviar and other beluga products from the Caspian Sea since 6 October 2005, after listing beluga sturgeon under the U.S. Endangered Species Act.

All content from Kiddle encyclopedia articles (including the article images and facts) can be freely used under Attribution-ShareAlike license, unless stated otherwise. Cite this article:
Beluga (sturgeon) Facts for Kids. Kiddle Encyclopedia.