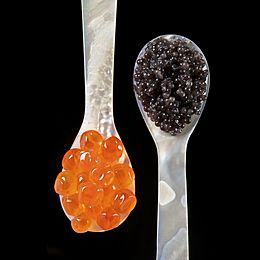 Salmon roe (left) and sturgeon caviar (right) served with mother of pearl caviar spoons to avoid tainting the taste of the caviar. 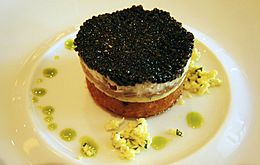 Caviar, sometimes called black caviar, is a luxury delicacy, consisting of processed, salted, non-fertilized sturgeon roe. The roe can be "fresh" (non-pasteurized) or pasteurized, the latter having much less culinary and economic value.

Traditionally the designation caviar is only used for sturgeon roe from the wild sturgeon species living in the Caspian and Black Sea (Beluga, Ossetra and Sevruga caviars). These caviar varieties, according to their quality (based on flavour, size, consistency and colour) can reach (February 2009) prices between $8,000 and $16,000 per kilo, and are associated with gourmet and Haute cuisine environments.

Depending on specific national laws, the name caviar may also be used to describe the roe of other fish such as salmon, steelhead, trout, lumpfish, whitefish, and other species of sturgeon. The term is also used to describe dishes that are perceived to resemble caviar, such as "eggplant caviar" (made from eggplant / aubergine) and "Texas caviar" (made from black-eyed peas).

According to the United Nations' Food and Agriculture Organization, roe from any fish not belonging to the Acipenseriformes species (including Acipenseridae, or sturgeon stricto sensu, and Polyodontidae or paddlefish) are not caviar, but "substitutes of caviar". This position is also adopted by the Convention on International Trade in Endangered Species of Wild Fauna and Flora, the World Wide Fund for Nature, the United States Customs Service, and the Republic of France.

Caviar is commercially marketed worldwide as a delicacy and is eaten as a garnish or a spread; for example, with hors d'œuvres.

Russian and Iranian Caviar tins: Beluga to the left, Ossetra in the middle, Sevruga to the right. 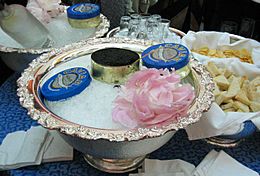 Caviar is simply sieved and lightly salted Sturgeon roe. The four main types of caviar are Beluga, Sterlet, Ossetra, and Sevruga. The rarest and costliest is from the beluga sturgeon that swim in the Caspian Sea, which is bordered by Iran, Kazakhstan, Russia, Turkmenistan and Azerbaijan. Wild caviar production has now survived only in Azerbaijan and Iran as Russia maintains a self-imposed ban on caviar trade from wild sturgeon. Beluga caviar is prized for its soft, extremely large (pea-size) eggs. It can range in color from pale silver-gray to black. It is followed by the small golden sterlet caviar which is rare and was once reserved for Russian czars, Iranian shahs and Austrian emperors. Next in quality is the medium-sized, gray to brownish osetra (ossetra), and the last in the quality ranking is smaller, gray sevruga caviar.

Caviar bearing the word malossol on its label indicates that the roe is preserved with a minimum amount of salt, malossol being the Russian for "little salt." Caviar is extremely perishable and must be refrigerated immediately until consumption. Pasteurized caviar is roe that has been partially cooked, thereby giving the eggs a slightly different texture. It is less perishable and may not require refrigeration before opening. Pressed caviar is composed of damaged or fragile eggs and can be a combination of several different roes. It is specially treated, salted, and pressed. Information on how to handle purchased caviar can be found on the label. Although a spoonful of caviar supplies the adult daily requirement of vitamin B-12 it is also high in cholesterol and salt.

The caviar of the sturgeon is the most expensive. Currently, dwindling fishing yields as a result of overfishing and pollution have resulted in the creation of less costly, though popular, caviar-quality roe alternatives from the whitefish and the North Atlantic salmon. The harvest and sale of black caviar (other than for use in scientific research) was banned in Russia in 2007 but resumed in 2010, limited to 150 kg (330 lbs) (see below).

Other popular and much less expensive types of roe, sometimes presented as caviar, include lumpfish caviar (tiny, hard, artificially coloured black or red eggs), whitefish caviar (also called American Golden) with its small yellow-gold eggs and salmon or red caviar (medium-size, pale orange to deep red eggs). Carp caviar is becoming increasingly popular in the United States due to carp's ability to lay millions of eggs a year, which makes it abundant and cheap. 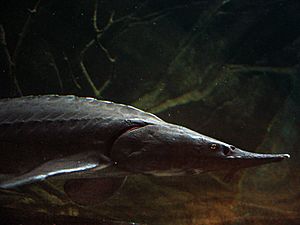 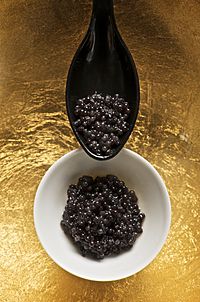 In the early 1900s, Canada and the United States were the major caviar suppliers to Europe; they harvested roe from the lake sturgeon in the North American midwest, and from the Shortnose sturgeon and the Atlantic sturgeon spawning in the rivers of the Eastern coast of the United States. Today the Shortnose sturgeon is rated Vulnerable in the IUCN Red List of endangered species and rated Endangered per the U.S. Endangered Species Act.

In Spain, a fish farm called Caviar de Riofrio has begun to produce organic caviar. The company raises sturgeon in such a way that it has earned an organic certification.

Current aquaculture of sturgeon is an economically viable means of sustainable, commercial caviar production, especially in Italy, Spain, France, Uruguay, the Middle East and California. Hackleback caviar is a popular, inexpensive product of this industry. Paddlefish, a sturgeon cousin, is also farmed in increasing numbers.

The Caspian Sea produces 90 percent of the world's caviar. Over-fishing and smuggling as well as pollution caused by sewage entry into the Caspian Sea have considerably reduced the sea's sturgeon population. 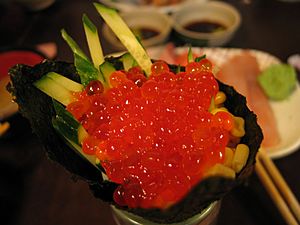 Given its high price in the West, caviar is associated with luxury and wealth. In Russia and other Eastern European cultures, though still expensive, caviar is commonly served at holiday feasts, weddings, and other festive occasions. In Russia, the concept generally includes both sturgeon roe (black caviar) and salmon roe (red caviar), the former not necessarily superior to the latter.

All content from Kiddle encyclopedia articles (including the article images and facts) can be freely used under Attribution-ShareAlike license, unless stated otherwise. Cite this article:
Caviar Facts for Kids. Kiddle Encyclopedia.