The Embassy of Portugal in London is the diplomatic mission of Portugal in the United Kingdom. The embassy is located on Belgrave Square, Belgravia, in two separate buildings, and there is also a Portuguese consulate in Portland Place, Fitzrovia. 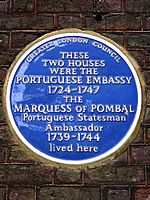 The embassy is now situated in a c. 1825 stucco terrace designed by George Basevi. The building is part of a single group of Grade I listed buildings at 1—11 Belgrave Square.

On 2 February 2002 a ceremony on the corner of the square facing the embassy took place, unveiling a statue of the famous Portuguese British Prince Henry The Navigator, whose mother, Philippa of Lancaster, was from England. The statue is very similar to the Prince Henry the Navigator (statue) in Fall River, Massachusetts, USA. 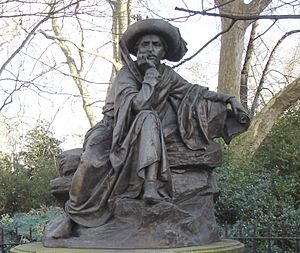 All content from Kiddle encyclopedia articles (including the article images and facts) can be freely used under Attribution-ShareAlike license, unless stated otherwise. Cite this article:
Embassy of Portugal, London Facts for Kids. Kiddle Encyclopedia.