Emerald railway station is a heritage-listed railway station on the Central Western railway line at Clermont Street (Capricorn Highway/Gregory Highway), Emerald, Central Highlands Region, Queensland, Australia. The building design was signed by Henrik Hansen was built in 1900 by Thomas Moir. It was added to the Queensland Heritage Register on 21 October 1992.

Emerald station is served by Traveltrain's Spirit of the Outback. 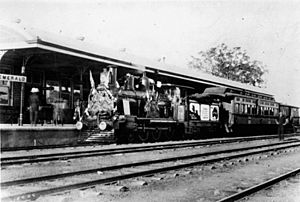 World War I recruiting train at Emerald station, circa 1916

The Central Western railway was extended from Comet to Emerald on 19 May 1879. Emerald was chosen as a point for branch lines to Clermont (1884) and Springsure (1887) to save building separate lines to each and to enable the main line to be extended due west. Although the railway extended west to Withersfield on 20 October 1880, Emerald's position as a railway junction made it a locomotive depot allowing Emerald to become a major regional centre.

The name Emerald was taken from a nearby property, Emerald Downs. In 1880 a goods shed and sheepyards were erected, and a coal stage in 1881. In 1882 an engine shed, fitting shop and smithy were erected. By 1885, with the building of the Clermont branch, a small repair shop and a new coal stage had also been built. In 1895 a contract was let for extension of the engine shed. Nothing is known of the original station building except that its removal to Raglan and Bajool was approved in 1903.

When Rockhampton Chamber of Commerce was advised in 1898 that a new refreshment room was to be built at Emerald, the Chamber pointed out the need for a new station building with a raised platform at this growing town. They were successful and a contract for the new station was awarded to Thomas Moir on 24 October 1900. The building design was signed by Henrik Hansen.

The station building and yard dominates the south side of the main street (Clermont Street). The station building, though very similar to earlier buildings of this group at Mount Morgan (1898) and Archer Park (1899), is distinguished by the semi-circular roof to the central portico which is in other respects similar to its precursors. Flanking pavilions are also distinctive elements having window shades and pedimented treatment with louvred lunettes, repeating the motif established by the central portico. The roadside verandah has cast iron columns and is partially built-in. The platform shade, unlike the carriage shades of the earlier designs has cast iron posts with a curved roof, comparing with South Brisbane (Melbourne Street) and Wallangarra. Accommodation consists of the central vestibule with former booking office and station masters office to the east (now office for maintenance staff and the stock officer) and former refreshment rooms to the west (now station offices). The recent interior fit-outs are generally unsympathetic although it is understood the original ceilings are in situ. Later quarters for refreshment room staff are attached at the west end. The goods shed is a 20-by-60-foot (6.1 m × 18.3 m) gable-roofed timber-frame c.g.i.-clad building with 2 doors to each side. The double rail weighbridge faces the passenger platform. The houses are contributary and also face the passenger platform from across the yard. The westernmost of the 3 is elevated with pyramidal roof, peripheral verandah and is relatively devoid of ornamentation. The present rolling stock depot includes a recent wagon shed erected over the site of the original engine shed drop pit which is stone and brick lined, and another shed 7 bays long with concrete floor slab and pit to a single siding and surmounting bow string truss roof.

Emerald Railway Station Complex was listed on the Queensland Heritage Register on 21 October 1992 having satisfied the following criteria.

Emerald and Longreach are two of the largest towns in Queensland which were established as a result of being made the site of a railway station, rather than the railway being built to serve the town.

The Emerald station building group with weighbridge and houses expresses through its architecture and close association with the main street and war memorial (recently removed), the importance of the railway to the township in 1900 and thereafter.

Its design is attributed to Henrik Hansen and it represents a high point in his career with the Chief Engineers branch as "draftsman deputed to plans for building construction".

The building is of distinctive design although forming one of a small group and represents its culmination given the existence of pavilions at either end.

All content from Kiddle encyclopedia articles (including the article images and facts) can be freely used under Attribution-ShareAlike license, unless stated otherwise. Cite this article:
Emerald railway station, Queensland Facts for Kids. Kiddle Encyclopedia.