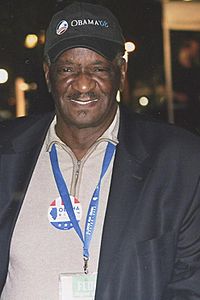 Jones was born in Chicago, Illinois. He studied at Loop Junior College (now Harold Washington College) and at Roosevelt University. He was married twice. His first wife, Patricia Jones died. He had four children with her. He is now married to Lorrie Jones.

All content from Kiddle encyclopedia articles (including the article images and facts) can be freely used under Attribution-ShareAlike license, unless stated otherwise. Cite this article:
Emil Jones Facts for Kids. Kiddle Encyclopedia.