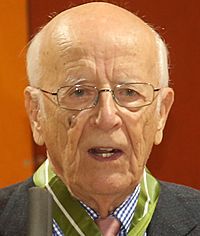 Emilio Lledó Íñigo (born 5 November 1927) is a Spanish philosopher. He has been a professor at several universities. He is a member of the Royal Spanish Academy. He was born in Seville, Spain.

Lledó was elected to Seat l of the Real Academia Española on 11 November 1993.

All content from Kiddle encyclopedia articles (including the article images and facts) can be freely used under Attribution-ShareAlike license, unless stated otherwise. Cite this article:
Emilio Lledó Facts for Kids. Kiddle Encyclopedia.