Emperor Yōzei (陽成天皇code: ja is deprecated , Yōzei-tennō, 869–949) was the 57th Emperor of Japan, according to the traditional order of succession. His reign started in 876 and ended in 884.

Yōzei was the oldest son of Emperor Seiwa. His mother was the Fujiwara no Takakiko. She was the sister of Fujiwara no Mototsune.

Yōzei was made emperor when he was a young boy.

Yōzei was succeeded by his father's uncle, who became known as Emperor Koko. During the reign of Kōkō's son, Emperor Uda, the former emperor became dangerous again. 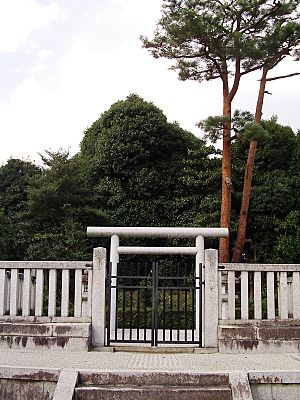 Yōzei lived in retirement until the age of 81.

The actual site of Yōzei's grave is known. This emperor is traditionally venerated at a memorial Shinto shrine (misasagi) at Kyoto.

The Imperial Household Agency designates this location as Yōzei's mausoleum. It is formally named Kaguragaoka no Higashi no misasagi.

The years of Yōzei's reign are more identified by more than one Japanese era.

In ancient Japan, there were four noble clans, the Gempeitōkitsu (源平藤橘). One of these clans, the Minamoto clan (源氏) are also known as Genji, and of these, the Yōzei Genji (陽成源氏) are descended from the 57th emperor Yōzei.

Yōzei fathered nine sons who were born after his abdication.

All content from Kiddle encyclopedia articles (including the article images and facts) can be freely used under Attribution-ShareAlike license, unless stated otherwise. Cite this article:
Emperor Yōzei Facts for Kids. Kiddle Encyclopedia.