End of the Trail (sculpture) facts for kids

The End of the Trail is a sculpture by James Earle Fraser located in Waupun, Wisconsin, United States. It depicts a weary Native American man hanging limp as his weary horse comes to the edge of the Pacific Ocean. The statue is a commentary on the damage Euro-American settlement inflicted upon Native Americans. The main figure embodies the suffering and exhaustion of people driven from their native lands. 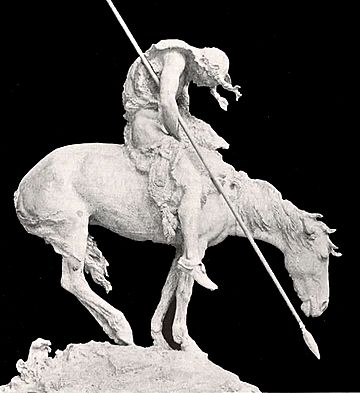 Fraser first modeled the subject in 1894. He based it on his experience as a boy in the Dakota Territory. His memoirs state, "as a boy, I remembered an old Dakota trapper saying, 'The Indians will someday be pushed into the Pacific Ocean.'" Later he stated "the idea occurred to me of making an Indian which represented his race reaching the end of the trail, at the edge of the Pacific."

A large plaster version of the work was displayed at the 1915 Panama-Pacific International Exposition in San Francisco and was awarded a gold medal. Soon prints and photographs of the statue became popular. When the Exposition closed, bronze was not available for casting statues because of World War I and the plaster sculpture was thrown into a mud pit in Marina Park near the site of the Exhibition. Fraser sold two sizes of bronze copies starting in 1918. The plaster version was rescued in 1919 and moved to Mooney Grove Park, near Visalia, California.

The Waupun statue is a copy of the plaster statue cast in bronze. The bronze version was commissioned by Clarence Shaler in 1926, and was dedicated on June 23, 1929 as a tribute to the Native Americans.

The original was moved from Visalia to Oklahoma City, Oklahoma in 1968, where it was restored and is now on display at the National Cowboy & Western Heritage Museum. The City of Visalia received a bronze replica as a replacement.

The Waupun statue was added to the National Register of Historic Places in 1980.

Many copies of the 1915 statue are on display, including one at the Metropolitan Museum in New York City, and another on the campus of Winona State University in Fraser's home town, Winona, Minnesota. A painting of the statue's image appeared on the original cover of the 1971 album Surf's Up by the Beach Boys.

All content from Kiddle encyclopedia articles (including the article images and facts) can be freely used under Attribution-ShareAlike license, unless stated otherwise. Cite this article:
End of the Trail (sculpture) Facts for Kids. Kiddle Encyclopedia.