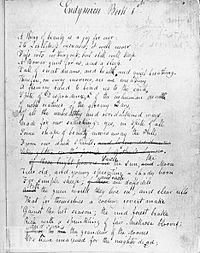 Endymion is one of the major poems of the English Romantic poet John Keats. It is his longest poem. Keats wrote the poem in 1817, and it was printed in a book in 1818. The poem's opening line is one of the most famous lines of poetry in English literature:

A thing of beauty is a joy forever.

Keats called the poem "A Poetical Romance." He wrote in four sections or "Books," and each section is about a thousand lines long. The poem is written in a form called rhymed couplets, which means that every two lines rhyme together. The story is based on the tale of Endymion from Greek mythology.

Endymion was criticized harshly when it was first published. Some of Keats's friends and admirers, like the poet Shelley, believed that the stress of this hostile reaction had a bad effect on Keats's mind, and partly caused his early death from tuberculosis at the age of 25. But most modern critics and scholars of English literature do not think this is true.

All content from Kiddle encyclopedia articles (including the article images and facts) can be freely used under Attribution-ShareAlike license, unless stated otherwise. Cite this article:
Endymion (poem) Facts for Kids. Kiddle Encyclopedia.