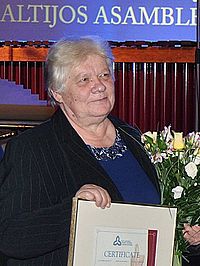 Mihkelson has also published four novels, a selection of critical essays (Kirjanduse seletusi, or Explanations of Literature) and a collection of short stories (Surma sünnipäev, or The Birthday of Death). In 2001 she published the novel Ahasveeruse uni.

Mihkelson's works frequently include allusions to her childhood, spent in hiding, Estonian mythology, and Estonian history.

In 2006 she was awarded the Herder Prize and in 2010 the Baltic Assembly Prize for Literature.

All content from Kiddle encyclopedia articles (including the article images and facts) can be freely used under Attribution-ShareAlike license, unless stated otherwise. Cite this article:
Ene Mihkelson Facts for Kids. Kiddle Encyclopedia.