English Bread and Yeast Cookery is an English cookery book by Elizabeth David, first published in 1977. The work consists of a history of bread-making in England, improvements to the process developed in Europe, an examination of the ingredients used and recipes of different types of bread. 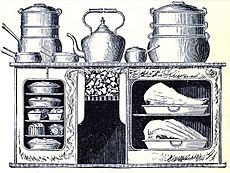 Edwardian cooking range: one of the illustrations in English Bread and Yeast Cookery

The food writer Elizabeth David had published six books and several booklets before 1977. Her first works had been about the foods of the Mediterranean, France and Italy, but she had also begun to write about English cuisine; her first book on the subject was the 1970 work Spices, Salt and Aromatics in the English Kitchen.

English Bread and Yeast Cookery was David's second book on English food, which she spent five years researching and writing. Some of the research was undertaken with Jill Norman, her friend and publisher. She was angered by the standard of bread in Britain and wrote:

What is utterly dismaying is the mess our milling and baking concerns succeed in making with the dearly bought grain that goes into their grist. Quite simply it is wasted on a nation that cares so little about the quality of its bread that it has allowed itself to be mesmerized into buying the equivalent of eight and a quarter million large white factory-made loaves every day of the year.

In the book, David reproduced a newspaper cartoon published during a bakers' strike in 1974, showing one housewife telling another, "I've been giving them sliced bathroom sponge, and they haven't noticed yet." 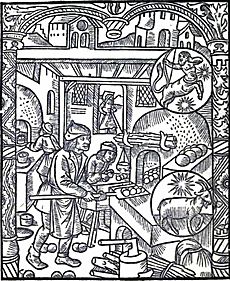 15th-century woodcut showing a baker and a pastrycook at work, reproduced in the book

The work covered the history of bread-making in England and an examination of each ingredient used. David follows the pattern of Spices, Salt and Aromatics in the English Kitchen, devoting the first part of the book to history and the second to recipes. Reviewing the new book, the food writer Jane Grigson wrote "Mrs. David gives the history of wheat and milling … She goes into weights and cost from the establishment in 1266 of the Assize of Bread up to present-day regulations, with a separate chapter on costing your own bread vis-à-vis bought loaves."

In the second part, David devotes chapters to recipes for various forms of baking. Bread comes first, followed by recipes for, among many other things, buns, yeast cakes, soda-bread, brioches, croissants, pain au chocolat and pizza. As in her earlier books, the recipes are interspersed with excerpts from earlier authors, including Fernand Braudel, Auguste Escoffier, and the painter John Constable.

All content from Kiddle encyclopedia articles (including the article images and facts) can be freely used under Attribution-ShareAlike license, unless stated otherwise. Cite this article:
English Bread and Yeast Cookery Facts for Kids. Kiddle Encyclopedia.