Enterolobium cyclocarpum, commonly known as guanacaste or elephant-ear tree, is a species of flowering tree in the pea family, Fabaceae, that is native to tropical regions of the Americas. It is the national tree of Costa Rica.

The tree is known in English as elephant-ear tree, Devil's ear or Devil's ear.

Common names in some other languages are:

Enterolobium cyclocarpum, the scientific name of the guanacaste tree was given by August Grisebach to this plant in 1864. 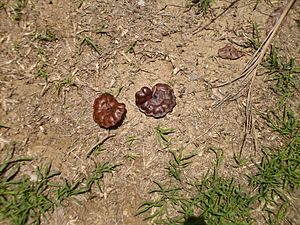 The guanacaste is evergreen, or briefly deciduous for 1–2 months during the dry season (without rains). Most leaves fall in December, at the start of the dry season. In late February, leaves start to appear and produce a fresh, thick crown by April.

Flowers are hermaphrodite; the pollination is by insects like bees.

The fruit is a legume (also known as a pod) with the shape of a human ear.

The guanacaste tree is native to tropical America. It grows from southern Mexico through Central America to northern South America. It is found also in the West Indies. It has been introduced in other tropical regions.

It grows normally at an elevation from sea level to 500 m (1,600 ft), usually along the coast and rivers.

The wood is reddish-brown, lightweight and water-resistant; it is used to make objects like doors, windows, furniture, cabinets, and for shipbuilding. It is used also as firewood.

All content from Kiddle encyclopedia articles (including the article images and facts) can be freely used under Attribution-ShareAlike license, unless stated otherwise. Cite this article:
Enterolobium cyclocarpum Facts for Kids. Kiddle Encyclopedia.